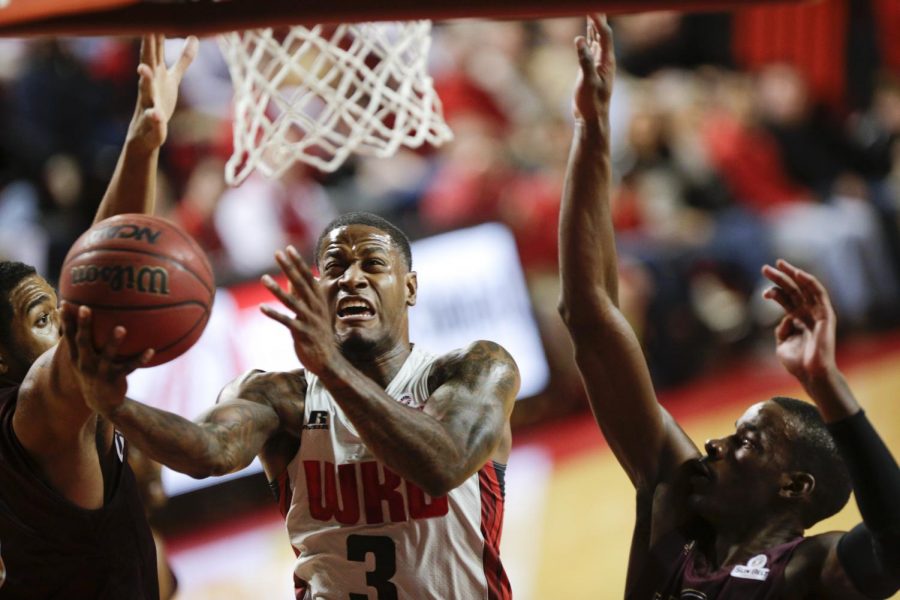 WKU junior guard Trency Jackson (3) goes up for a layup during the first half of WKUÕs game against the University of Louisiana-Monroe Saturday, Feb. 22, 2014 at Diddle Arena in Bowling Green, Ky. (Mike Clark/HERALD)

Soumaoro anchored WKU’s defense and Jackson sparked the offense with a career-high 25 points.

Harper said he felt like the team needed Jackson’s explosion and intensity in the starting lineup.

Jackson credited his teammates for finding him in the right spots.

“They were getting it to me in transition and I just got it and fed off it,” Jackson said.

The Toppers fed off Jackson’s energy early. They took an 18-1 lead after Price sunk a three-pointer.

That defense was propped by Soumaoro, who got his first start in his Topper career. ULM didn’t net a shot from the field until the 11 minute mark.

“I thought our defense was better when he was in there,” Harper said.

The 6-foot-10 big man contested shots at the rim and consistently attacked the glass on both ends. He finished with two points, eight rebounds and a block.

“Rebounding is one of my strengths, so (Harper) basically told me ‘If you rebound for me, I’m going to play you a lot of minutes’,” Saoumaoro said.

Soumaoro earned those minutes, registering 27 minutes of playing time, the third most of any Topper on the night.

The Toppers went into halftime with a 39-24 lead, despite just five minutes from Fant, who picked up two early personal fouls.

WKU never surrendered it’s stranglehold over the Warhawks in the second half: ULM never seriously threatened to overcome its deficit.

Harper said earlier in the week that his team looked focused in practice. On Saturday they confirmed that observation.

“We’ve got two games next week, a tough swing to Texas and we need three really good practices to start this week,” Harper said.

WKU will hit the road for its Texas road swing. The Toppers play at Texas State Thursday and finish up the trip at UT Arlington on March 1.