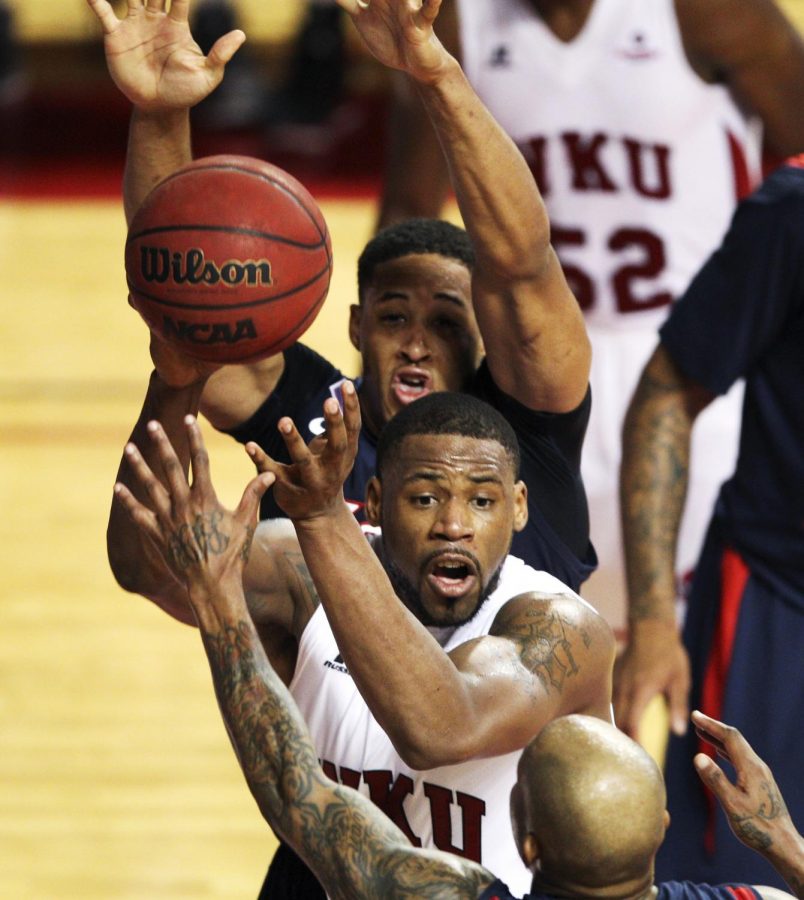 WKU forward George Fant (44) looks for a player to pass to during the second half of Saturday's game against South Alabama at Diddle Arena. South Alabama won 69-62. (Austin Anthony/HERALD)

Someone forgot to tell South Alabama they were statistically the worst team in the Sun Belt Conference. Someone also forgot to relay that very message to WKU.

It was South Alabama who “wanted it more” with a 69-62 win, the team’s second conference win on the year.

The Toppers (17-9, 9-4 Sun Belt Conference) didn’t reach double digits on the scoreboard until the 4:48 mark of the first half.

While George Fant and T.J. Price hit their rhythm in the second half – Fant with 17 points and 10 boards and Price with 15 points – they couldn’t stop the quick Jaguars defensively.

“They’re talented, and I think it showed up tonight,” coach Ray Harper said. “The first half was just a struggle for us. We got some good looks. I thought we settled for too many three-pointers when they went zone. We didn’t play a lot of east-to-west, We didn’t get in gaps. We scored enough points in the second half to win the game, but we didn’t get enough stops.”

It didn’t matter if WKU’s offense clicked in the second half with 48 points, or that they hit seven three-pointers – three of them coming from senior Brandon Harris, who finished with 12 points – they weren’t the best team on the floor for 40 minutes.

“They wanted it more than us,” Harris said. “We tried to kick it in there in spurts, but you can’t start 25 minutes into the game and expect to just pull it off, it doesn’t happen that way all the time.

“You can’t just expect a miracle all the time. You have to make stuff happen and we didn’t.”

WKU’s first bucket didn’t come until the 16:16 mark with a George Fant jumper.

What little life the Toppers had came just four minutes later with a 6-0 run capped by wide open layup by freshman Payton Hulsey thanks to an under-the-basket pass from senior O’Karo Akamune.

WKU scored 10 points in the first five minutes of the second half, thanks in large to back-to-back triples from Harris, but South Alabama had an answer for any life WKU would try to spark.

With South Alabama up 36-18 at the 16:46 mark of the second half, a three-point duel ensued between Harris and Augustine Rubit. Once Harris made a shot, Rubit would answer.

This same song was sung on the next possessions for both teams, showing that the Jaguars had an answer for everything the Toppers tried to throw their way.

“We scored 48 in the second half,” Harper said. “Had a couple of those (first half) shots went in – I’ve been around these guys long enough – we’d have been fine. When they’re not going in they don’t know how to handle it. They don’t handle it correctly. Let some of those go in and we’re feeling good, we would’ve been fine.”

A fast break layup by Aakin Saintil sent the majority of the 4,824 in attendance for the exits with 26.9 seconds remaining with the Toppers down by six.

Chris Harrison-Docks, who WKU usually relies on to consistently hit from behind the arc, pulled up and made his first triple of the night with 29 seconds left to pull WKU within its closest margin at six.

“We knew coming into this game that they needed this game mathematically to get into the conference tournament,” George Fant said. “I feel like they came out and wanted it more. We slipped up and it’s a tough pill to swallow.”

WKU will have a week to prepare for its final game in part of a three-game homestand with a matchup against Louisiana-Monroe Saturday night at 7:00 p.m. in Diddle Arena.