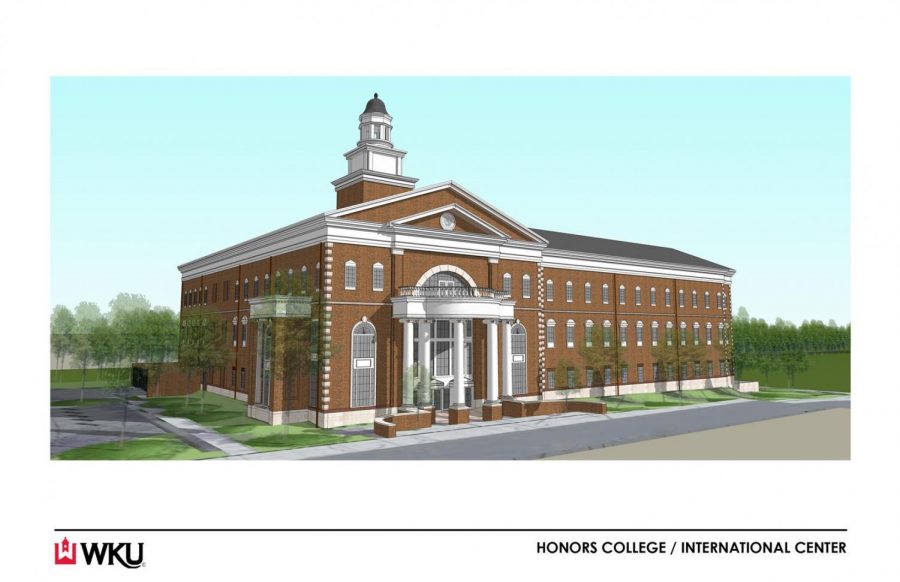 An illustration of the new Honors College and International Center building that will be completed in 2015.

Construction of the Honors College and International Center will begin in early March.

A&K Construction was awarded an approximate $14.7 million contract to construct the building. The Paducah-based company served as the general contractor for Gary Ransdell Hall as well.

Bryan Russell, director of Planning, Design and Construction, said WKU is happy to work with the company again.

“We look forward to another successful partnership on this building,” Russell said.

Kerra Ogden, project manager of Capital Construction, said the bids to build the structure were very competitive. While a normal project usually yields five bids, 12 contractors vied for the rights to construct the Honors College and International Center.

“Honestly, I don’t remember there being that much contractor interest in any other job that I’ve ever been involved in,” Ogden said.

The company mobilized on Monday. The gravel parking lot has been closed, and Hillcrest Apartments will be removed in early March. In the meantime, the apartment complex will be utilized by Bowling Green’s fire and police departments for training.

The three-story building will house the Honors College and its faculty as well as numerous offices, including the Kentucky Institute for International Studies, Study Abroad and Global Learning, and the Office of Scholar Development. The building is projected to be completed by August of next year.

Due to the sinkhole that formed in the Corvette Museum earlier this month, Ogden said testing will be done to further determine if there are any sinkholes in the space where the Honors College and International Center is being built. The process will not hinder the construction progress.

Craig Cobane, executive director of the Honors College and chief international officer, said the building will serve as a “gateway”to the rest of the world for students.

“And what this international building does, it makes it really easy and really obvious for all students at WKU to know where to go if they want to have that life-changing, international educational opportunity,” Cobane said.