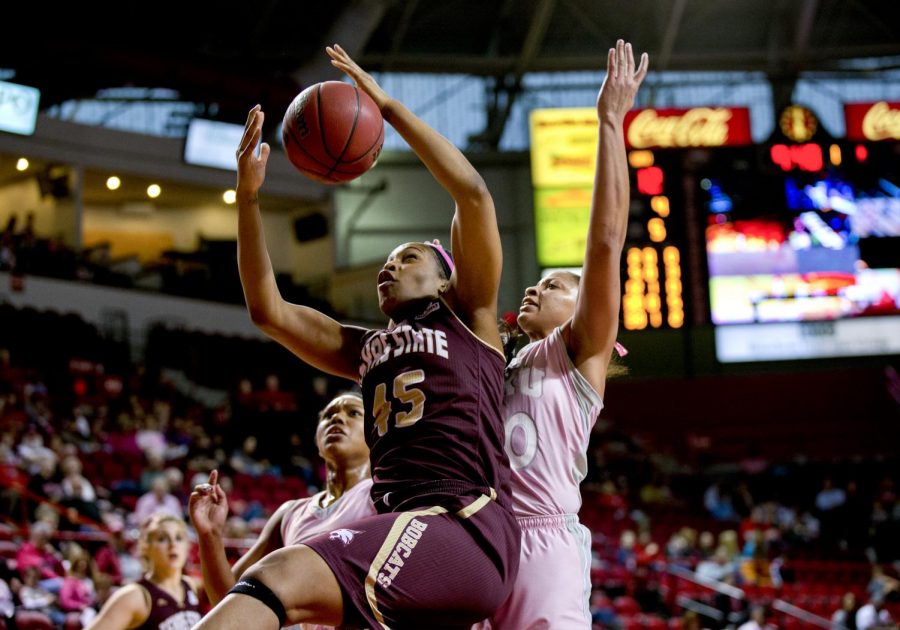 Texas State's center Ashley Ezeh (45) beats junior forward Chastity Gooch (30) for a rebound during the first half of WKU’s game against Texas State on Saturday, Feb. 1, 2014 at Diddle Arena in Bowling Green, Ky. The Toppers struggled early but lead 31-26 at the half.

With only nine games remain on the schedule for the WKU before conference tournament time rolls around, the Lady Toppers (14-6, 6-3 Sun Belt Conference) can’t afford to have defensive collapses like what happened in a 72-63 loss to Texas State last Saturday.

A performance like their previous one will end in a similar result when they travel to the Sun Belt’s top-ranked Arkansas State (13-8, 7-2 Sun Belt) Wednesday, a team that already has their number.

Before Saturday’s game, the Lady Toppers’ last loss came against the Red Wolves Jan. 18 in a 67-64 decision.

Coach Michelle Clark-Heard said following the loss to Texas State on Saturday that defense will be the primary focus for WKU moving forward.

“Defense,” Heard said. “I’ll say it one more time and again and again – we have to get better. Our rotations were off, we didn’t rebound the way we needed to and we couldn’t get stops when it counted. That’s what we have to go back and evaluate…we’re going to learn from this and get better.”

As if the defense didn’t present its own struggles, the Lady Toppers were ice cold from the field against Texas State, shooting just 27 percent with 8:29 left in the first half and finishing at a 37.7 percent clip while the Bobcats shot 45.8 percent from the floor. WKU was also outrebounded by 10, allowing Texas State to rack up 17 second-chance points.

In the case of WKU, the defense will have to improve in order to compliment the offense.

“Our offense can’t dictate our defense,” Heard said. “It has to be the other way around and that’s what we’re going to go back and go to work on.”

WKU begins its second two-game road trip in two weeks on Wednesday in a battle with Arkansas State. With the Red Wolves at the top of the league standings, WKU is currently tied with Georgia State (10-11, 6-3 Sun Belt) for the second spot.

Arkansas State is averaging 73.7 points per game while giving up just 66 in conference play, which is good for a league-best +7.7 scoring margin. The Lady Toppers’ league scoring margin is not far behind at +7.2.

Avoiding complacency was a focal point of the Lady Toppers’ matchup with Texas-Arlington and Texas State during their home stand. Heard is using the loss as a wakeup call for what the team must accomplish in the remaining nine games on the year.

“You have to learn from your mistakes, you have to move on,” Heard said. “And that’s what we will do. We will get better and we’ll have a game plan ready and we’ll figure out how to get the girls ready to come out of the locker room and ready to go, because both of those teams will be ready for us on the road.”