In My Skin: Student balances classwork and motherhood 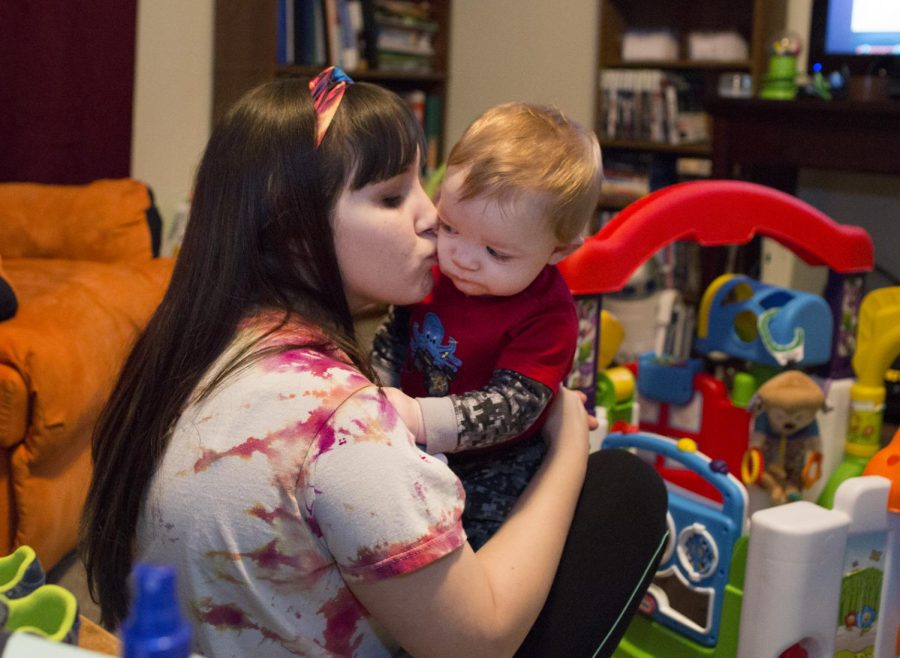 Kelsey Luttrell kisses her son Daniel Kono while playing on the floor of her apartment Monday night. Luttrell, 22, balanced a full-time course load with raising her child. "I am not your stereotypical teen mom," she said. "I am in the Honors College, I am going to graduate on time, and I am going to do something with my life. Having a child in college is not a life ending thing; it's a life changing thing." (Connor Choate/HERALD)

Three hours before her last final, Kelsey Luttrell went into labor at 33 weeks — and seven weeks early — on May 7, 2013. Missing the final would result in an incomplete, dropping her from full-time student status and barring her from her scholarships.

Labor and Delivery personnel had advised her to get to the hospital immediately. Committed to her schooling, however, Luttrell began her final early.

“My professor had told us what was going to be on the exam,” the Madisonville senior said. “It was an essay exam, so I knew what the essay was. I had a bluebook so I was like ‘I’m just going to start writing.’”

By 5 p.m., she had been in labor for 3 hours and contractions were about five minutes apart. Nearing tears and already executing her breathing exercises, Luttrell was finally allowed to leave the class.

“My professor came up to me and told me to finish the sentence [I was writing] and go, as if to say: ‘I’m not going to have your water break in my classroom,’” she said.

An ambulance spirited Luttrell to the Vanderbilt University Medical Center, where nurses gave her a shot to keep her from delivering the baby.

Luttrell first discovered she was pregnant in October of 2012. She was 20 years old.

On a Sunday morning after a night out, Luttrell said she woke up with weird feeling.

She went out and bought a home pregnancy test that morning, but didn’t expect it to be positive.

“I remember the first thing I did was run upstairs,” she said. “I shook him (her boyfriend), and I was like ‘I can’t be pregnant, I was planning on going to law school.’”

Her boyfriend and Daniel’s father, Dustin Kono, a sophomore at Southcentral Kentucky Community and Technical College, was more calm than Luttrell had been when he found out.

“It was kind of unreal at first,” Kono said. “We didn’t really believe it.”

The following day, the couple visited WKU Health Services, and the news was confirmed.

“It was basically like, ‘You’re pregnant’ on a piece of paper,” Luttrell said. “At that point, it doesn’t register that you’re having a baby.”

Luttrell, forced to grow up faster than she expected, said her life and habits did a complete turnabout. She forced herself to transition from a student who partied on weekends into an expectant mother.

Stewart said she was one of few friends genuinely excited about Luttrell’s pregnancy.

When Luttrell was 15 weeks pregnant, she and Kono discovered that Daniel had Gastroschisis, a birth defect in which the baby’s small and large intestines and stomach developed outside his body.

They spent 45 days in Vanderbilt’s neonatal intensive care unit, while doctors did a daily procedure that pushed the organs into his body through the bellybutton.

“My biggest regret is not being there while they were in the NICU,” Stewart said. “But I’m so glad I can be there now.”

Luttrell now lives in an apartment at the Bowling Green Scholar House on Brownslock Road. The Scholar House offers affordable housing for student parents and first priority day care at an on-site facility.

Jenny Wix, the site manager for Bowling Green’s Scholar House, said the Scholar House is a 56 unit housing and education initiative that helps student parents with housing and costs while they continue their education.

Students apply at the Scholar House and are given a voucher to Section 8 Housing who then subsidizes the student’s rent.

Unlike most Section 8 Projects, the Scholar House has special funds set aside, allowing students to receive housing funding relatively quickly.

Wix said when students graduate and leave the program, they’re eligible to take the voucher with them.

Students who live at the Scholar House must have a year left in school. Currently, the five year old Scholar House has 50 residents who have children of wide range of ages, anywhere from a few months to 16 years old.

“It’s a really good program for mothers with children who normally couldn’t afford to live on their own,” Wix said.

With a day care on site that gives preference to Scholar House residents, Wix said the program does all it can to help out.

“We have washers and dryers in each room,” she said. “They come with wifi on the property, and we have a community room with computers and printers for residents to get their homework done.”

Living at the Scholar House has allowed Luttrell to take 19.5 hours this semester, maintain good status with the Honors College, and attend a weekly internship at a local prison — all in addition to raising her son.

Luttrell’s grandmother has stepped in and taken the place of her parents, Luttrell said. She often babysits Danny and keeps him to allow Luttrell some personal time to unwind.

Stewart watches Danny when Luttrell’s grandmother is unable to do so.

“On the first day of class, I watched him so she could go to all her classes,” Stewart said.

Stewart, along with her fiancé, regularly get together with Luttrell and Kono at their apartment to play board games or Magic: the Gathering.

“Things change when you have a baby,” Luttrell said. “We can’t go out every weekend anymore.”

Stewart believes the most important thing anyone can give a young parent is a support system.

“Her family isn’t in BG, but her grandmother is and she’s become a huge part of hers and Danny’s life,” Stewart said.

Both Luttrell and Kono said everyone loves being around the baby.

“He’s happy and funny,” Luttrell said with a smile.

“And he loves attention,” Kono added. “He’s changed my life for the better. It’s cool watching something grow that you made. Your little human.”

Luttrell said she feels like a walking public service announcement for student parenthood.

“Life’s not going to end when you have a baby, it’ll just change a lot,” she said. “I love being a parent. It’s so much fun.

“It’s not the end of your life,” she added. “I’m not telling everyone to go out and get pregnant. But if you do, it’s so fun. Different, but really fun.”