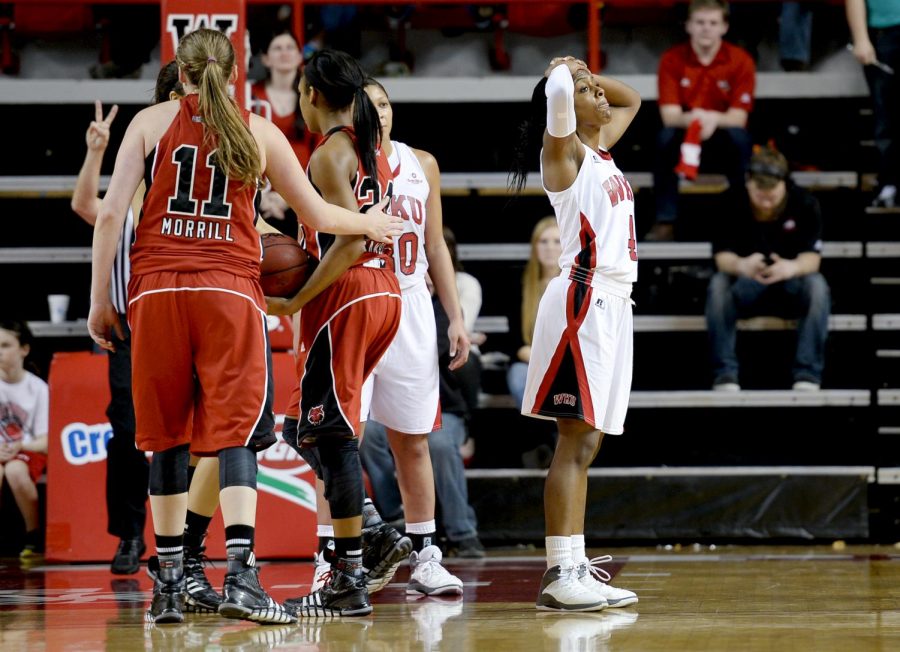 Junior guards Chanell Lockhart reacts after being called for a foul during the Ladytoppers 64-67 loss to Arkansas State on Saturday, Jan. 18.

The Lady Toppers held a six-point lead with 8:37 in the second half, but were unable to weather a late Arkansas State run as the Red Wolves pulled away from WKU for the 67-64 win in Diddle Arena on Saturday as a part of the 31st annual BB&T Classic.

The loss drops WKU (11-5, 3-2 SBC) to 6-2 at home. The Lady Toppers were without leading scorer Alexis Govan for the fourth straight game due to a stress fracture.

Junior forward Chastity Gooch tallied 19 points to lead the way for the Lady Toppers. Sophomore guard Micah Jones and redshirt freshman guard Kendall Noble combined for 28 points, 22 of which came in the second half.

“We just couldn’t get a stop the last three minutes,” Noble said. “They just kept scoring and we weren’t scoring. That’s pretty much what it came down to.

“We had a chance to win, we just couldn’t pull it out.”

Coach Michelle Clark-Heard said it was refreshing to see her team battle back and reclaim the lead in the second half.

“We were down and we battled back,” Heard said. “We just have to get better at making sure that, in certain situations, we’re doing the exact things that we need to do defensively. We’re going to use this game as a teaching moment.”

The Lady Toppers found themselves down 12-7 after beginning the game just two-of-13 from the field through the first 10 minutes.

Senior guard Bianca McGee’s three-pointer capped off a 12-3 run with 7:30 left in the first half to give the Lady Toppers their first lead since the 17:23 mark.

A 10-2 Arkansas State run regained the lead for the Lady Red Wolves, but Noble scored four straight points in the final 1:17 of the half to bring the Lady Toppers within one heading into halftime, 29-28.

A Gooch jumper with 18:25 on the clock gave WKU a one-point lead that escalated to an eight-point advantage behind a three-point field goal from Jones with 12:44 left. Jones was two-for-two beyond the arc in the game.

McGee and Jones extended the Lady Topper lead to six, but WKU converted just two of its nine field goal attempts and gave up 19 points in the final 8:37 en route to the 67-64 loss.

Noble said the win was in sight for the Lady Toppers, but Arkansas State’s late run was too much for WKU.

The Lady Toppers look to right the ship against Louisiana-Monroe on Jan. 22 at 7:00 p.m. CT in Monroe, La. WKU is 13-2 in bounce-back games during Clark-Heard’s coaching tenure.