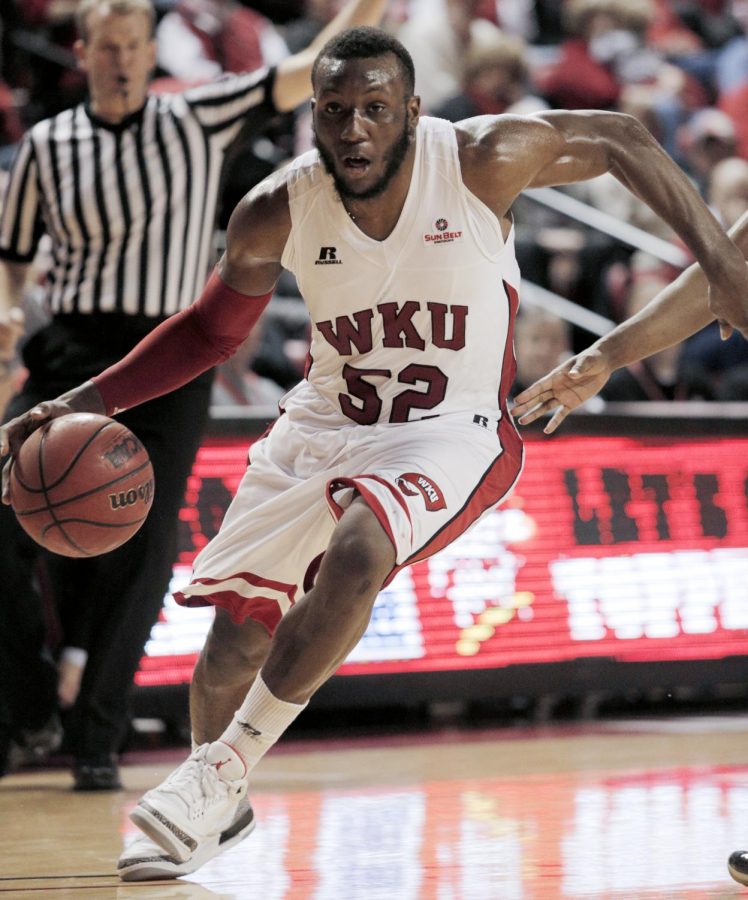 WKU junior guard T.J. Price drives the ball during the second half of WKU's game against Georgia State Thursday Jan. 9 in Diddle Arena. Price was the leading scorer for WKU with a total of 15 points. Georgia State defeated WKU 77-54 making WKU 2-1 in Sun Belt play this season.

Tyler Lashbrook
WKU junior guard T.J. Price put on a show Thursday night in Monroe, La., as the Toppers ran past Louisana-Monroe 69-51.
Price finished as the game’s leading scorer with 26 points and 10 rebounds. He worked inside for a few buckets, but it was from behind the arc where the junior did most of his damage: he hit seven shots from three-point range.
Senior guard Caden Dickerson added nine points and junior forward George Fant finished with seven points and five rebounds.
The Toppers (12-7, 4-2 Sun Belt Conference) took a 21-20 lead when Price hit a nearly impossible, fade away three-point jumper as the shot clock expired. Moments later, Price hit another one from deep, his fourth of the first half.
He finished the first 20 minutes with 16 points and five rebounds as WKU took a 32-27 lead in the first period.
WKU jumped out to a 45-30 lead eight minutes into the second half and never looked back from there. The Warhawks (7-7, 3-3 Sun Belt) nagged away, but could never cut the lead the single-digits.
The Toppers are now 3-0 on the road in conference play and will finish up their Louisiana road swing against Louisiana-Lafayette Saturday afternoon at 3 p.m.
Delete Image
Align Left
Align Center
Align Right
Align Left
Align Center
Delete Heading