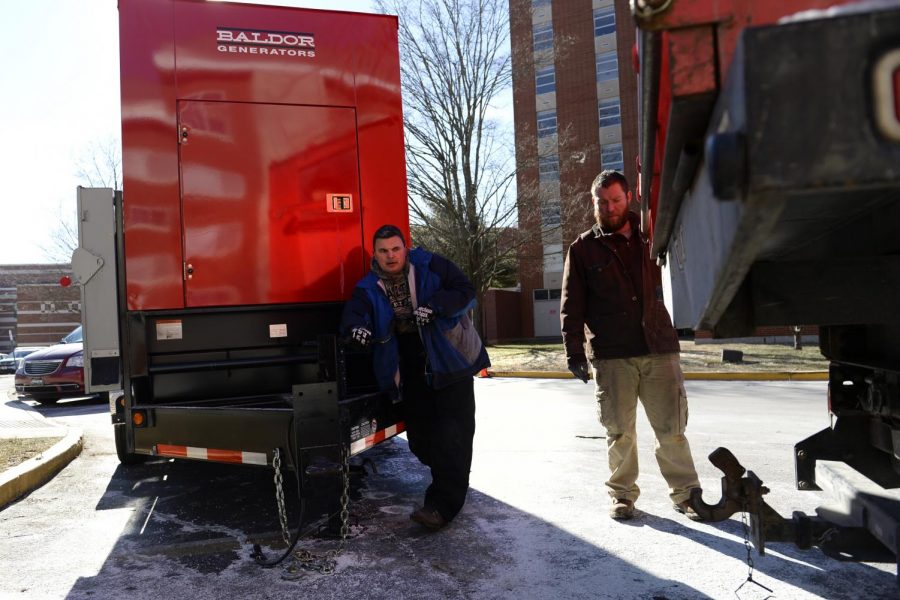 Adam Garret and Travis Kugler, both of Bowling Green, Ky., guide a truck as they hook up a generator in front of Southwest Hall Thursday afternoon. A bursted water main in Northeast Hall caused a short that knocked out power in  three dorm rooms.

A water main break was the cause behind a power outage that put Northeast, Southwest and Bates-Runner Halls in the dark around 10 p.m. Thursday night causing the buildings to be evacuated and to students to disperse to other dorms on campus.

“Last night, a little before 10 o’clock, we had a three inch water main that broke that goes into the mechanical room at Northeast Hall,” said Brian Kuster, director of Housing and Residence Life. “It flooded all of the electrical gear-the transformer and switch gear-and all of the electricity that runs through that that powers Northeast Hall, Southwest Hall, Bates, and the facilities office.”

Kuster said the residents of Northeast and Bates were relocated to other residence halls across campus.

“We only put people in spaces that we knew we had open,” he said.

Kuster said HRL has contacted residents who live in the affected residence halls that have not moved back in yet to not do so until Sunday.

“Students will be able to move back in at that time,” Kuster said.

“At worst case we’ll have power by Sunday,” Kuster said.

This is the second time this month a pipe has burst in Northeast Hall. The first known burst happened on Jan. 7. At the time, David Oliver, director of Environmental Health and Safety, said other pipes would most likely burst once the weather warmed up.