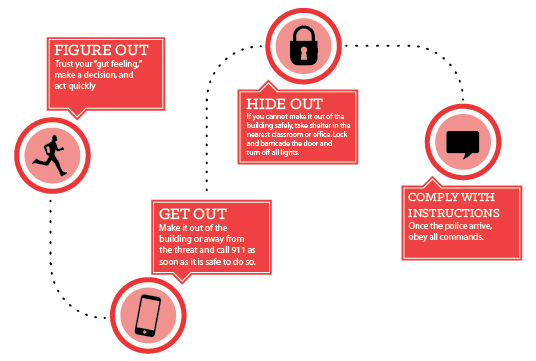 Amid debates about gun control, stories concerning mass shootings are no longer a rarity on American news stations. According to Global Research News, school shootings have occurred in America since its founding, but the number of random, public acts of violence has been on the rise since the 1960s. Since 2010, there have been 14 mass shootings.

In January of this year alone, there have already been 11 school shootings, which have taken the lives of two individuals and injured 11 others. Last week alone, five college and high school campuses were jilted with school shootings, lockdowns and threats of a gunman.

Because of such incidents, the WKU Police Department has created a Special Response Team (SRT) to train officers for situations where there are armed assailants. Discussion for development of the team began in 2007, the same year that Seung-Hui Cho killed 32 people at Virginia Tech.

Craig Sutter, sergeant of professional standards and member of the SRT, is in his twelfth year with WKUPD. He referenced the 1999 Columbine High School shootings in which 33 people were killed.

“The history of the active shooter goes back to predominantly the Columbine shooting,” Sutter said. “During that, the police response was to sit and wait for the SWAT team to arrive. Of course we saw what the results of that were…a lot of death and injury and destruction.”

Sutter said police decided they had to change their response to the active shooter.

“So now, whoever’s available is going to go in and address the threat,” he said. “And if it’s an active shooter, the training dictates that we, the police, go seek out that shooter and address it.”

The formation of the SRT has been an ongoing process, recruiting its first seven members in 2009.

Sutter said that members of the SRT are recruited from the WKUPD and work as lateral respondents. Each member completes SWAT training and other courses which help the police to mentally prepare better for such events. They plan to expand their block on active shooting this year.

SRT members are issued special equipment such as ballistic Kevlar helmets and patrol rifles. They received their first rifles via the 1033 Surplus Weapons Programs, which allocates special weapons, designed for war zones, to certain police agencies.

Brandon Humphries, sergeant of investigations and member of the SRT, said that while the SRT is not technically deployable as of now, it will take action if necessary.

“If a situation occurred, we would still respond accordingly but not necessarily in the fashion you would think (from) seeing the SWAT team in the movies,” Humphries said.

In 2008, WKUPD alerted students and faculty there was an active shooter on campus. The reports turned out to be unfounded, and a picture was ran in the Herald of a WKU officer with a patrol rifle holding a student to the ground. While this stirred controversy, Sutter said the police would not change how they reacted to the situation.

WKU has posted guidelines within its Building Emergency Action Plan which outlines how to react in the case of an active shooter.

According to the plan, it is important to decide immediately whether you will get out of the building, hide within the building or take out the shooter.

The last option is presented in the BEAP as a possibility if you are directly confronted by the shooter where “the only remaining option may be to fight back.”

There is also a video posted on the WKUPD website titled “Shots Fired on Campus.” The video is 20 minutes long and goes through several active shooter scenarios, emphasizing the importance of a survivor mindset.

Humphries and Sutter visit various groups on campus, such as workers at Health Services and Preston Center, to discuss the contents of the video.

“If you can take the time of your 20-minute lunch break to watch the video, you will be that much more prepared,” Humphries said.

“I do (worry) to a degree, especially when I see shootings at other college campuses and things like that,” Williams said. “It really makes you think about what you would do if something happened like that at Western.

“But I think we’ve been fortunate enough not to have anything other than a few incidents,” he said. “We’ve been pretty lucky to have a relatively safe campus the past four years that I’ve been here. Hopefully it continues to be like that.”