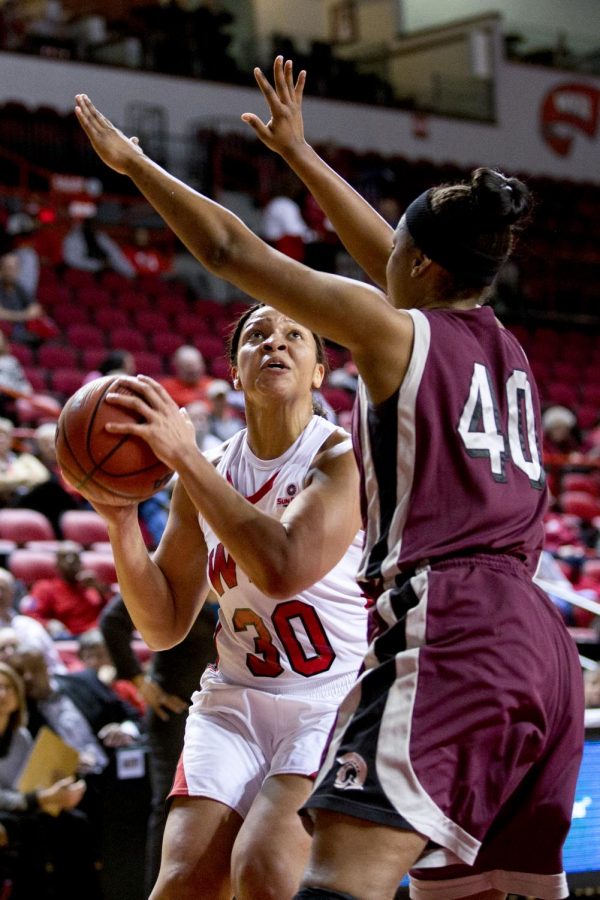 WKU junior forward Chastity Gooch tries to get around UALR forward Kaitlyn Pratt during the second half of WKU's 65-39 victory over the University of Arkansas Little Rock Wednesday, Jan. 15, 2014 at Diddle Arena in Bowling Green, Ky.

WKU was fueled by a career-high 31 points from junior forward Chastity Gooch to overcome a 13-point deficit to defeat Louisiana-Monroe, 77-73, Wednesday night in Monroe, La.

Gooch netted her 1,000th career point in the first half of the contest, joining teammate Alexis Govan, who reached the 1,000-point plateau on Dec. 7 in a losing effort against Ball State. Gooch is the 35th WKU player to score at least 1,000 points in a Lady Topper uniform.

The Lady Toppers trailed by 11 points at the half but made their first four shots of the second period to cut the Louisiana-Monroe lead to seven with 15:56 remaining.

A Noble three-pointer gave the Lady Toppers the lead with under 10 minutes to play. Noble has averaged 12.8 points per game in the last five outings.

The Hazard native nailed another crucial three-pointer to extend the Lady Topper lead to 72-68 with just over a minute remaining.

Senior guard Chaney Means and sophomore guard Micah Jones went four-for-four from the free throw stripe in the final minute to seal the deal for WKU.

The Lady Toppers are now 12-3 under coach Michelle Clark-Heard in games after a loss.

WKU continues its Louisiana road trip Saturday at Louisiana-Lafayette for a battle with the Ragin’ Cajuns at 5:00 p.m. CT.