Pratt: Toppers may have defined their season Saturday night 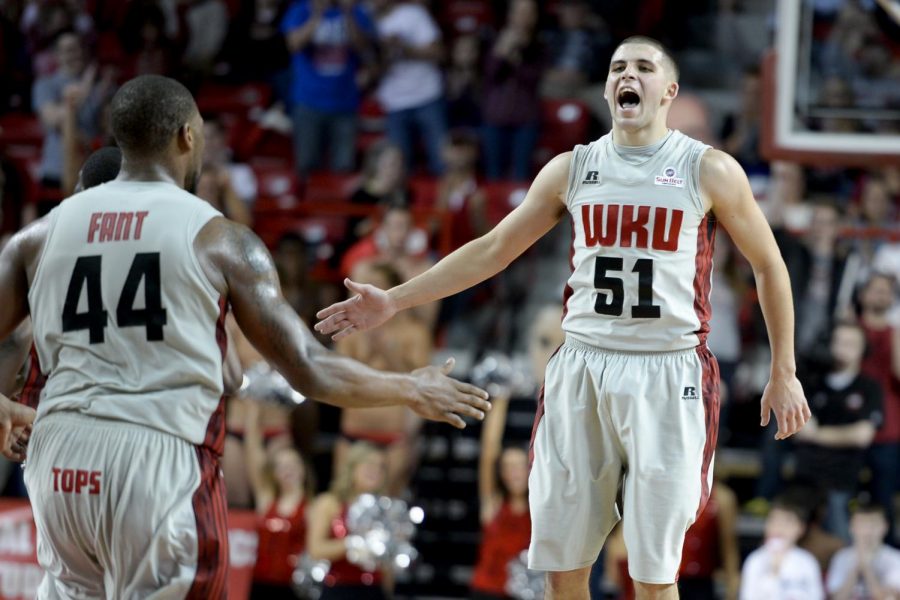 Freshman guard Chris Harrison-Docks celebrates with junior forward George Fant after making back to back three pointers during the second half of their game at Diddle Arena. The Toppers would win the game 82-77 in double overtime.

Ray Harper was answering a question about WKU’s defense stopping Arkansas State’s three-point shots. It was a routine question in a routine press conference; Harper’s tie loosened with the top button of his shirt undone and a Diet Coke to his right.

Then his emotions took over for the next two minutes, emotions that are brought in the power of moments that can only resurrect between the comradery of five men on a basketball court.

The Toppers had had enough of not finishing games in Diddle Arena after dropping the last three on John Oldham court.

“Our plan is to be conference champs,” junior guard T.J. Price said, who scored 19 points in the game after serving a one-game suspension. “The main way to do that is to win all our home games and we already dropped two. We couldn’t do three in a row at home.”

In the combined free 15 minutes of overtime play in the last two games, Topper fans have seen their team at their best and worst after a loss in OT to Arkansas-Little Rock Thursday. But it was Saturday night’s 82-77 double-overtime win over Arkansas State may have been a little sweeter than usual because of moments that only sports can provide.

Moments like Chris Harrison-Docks begging for the ball then stealing it before hitting three-consecutive triples during a 12-point WKU run in the second half that set the tempo for the remainder of the evening.

Saturday night was sweet because of moments where George Fant ‘ate’ in the paint all night for not only an unforgettable game with a career-high 27 points, but a career-defining moment to become the 48th player in Topper history to score 1,000 points wearing a WKU jersey.

It’s moments like T.J. Price, another member of the 1,000 point club, while fighting fatigue, scissored his legs for an un-Price-like three-point shot in the left corner to regain the lead in the first overtime for WKU.

Price flopped to the floor from pain of a cramp as his shot went in, chugged a blue Powerade, and was assisted as he hobbled slowly to the bench and entered back into the game less than a minute later like nothing happened.

It’s moments like those in this point more than halfway into the season that can make or break a team. WKU was on the verge of breaking. Instead, Harper told them to find their identity and make it a ‘defining moment’.

I’m not going to lie, there came a point in that press conference where instead of taking notes on what Harper was saying, I found myself just listening to the coach’s words, and nearly went to out on the court to dunk a basketball.

I’m 5-foot-7-inches with no game, if what Harper said drove me to think I could touch rim, then guys like Fant, Price, and CHD could be having a lot of fun for the rest of the year.

Sure, this was one game. Sure, Harper’s post-game message may have been filled with cliches about not quitting and giving it your all, but it’s moments like Saturday night that can turn a season around for a team.

WKU sits in fourth-place in the Sun Belt Conference with trips to the Bayou ahead next week against Louisiana-Monroe and Louisiana-Lafayette, both teams sandwiching the Toppers in the conference standings with 3-2 records in the league.

It very well could have been just another game that in hindsight, doesn’t have much meaning other than another notch in the win column, but not every game is going to have the magic that took place in Diddle Saturday night – tough games are inevitable. But moments that define a season can happen any time, we’ll find out if Harper’s weekend sermon gives revelation for what’s to come in the next 13 games soon enough.

“We may have another tough one before the season’s over, but I bet you we don’t quit. We’re going to keep fighting, and if my teams do that, I’ll be proud of them one way or the other,” Harper said. “I’m not going to let a scoreboard define who my teams’ are. I tell them, ‘don’t worry about wins and losses, worry about the process. Worry about playing hard, worry about competing. Do that and you’ll be successful not only here, but long after you leave here’. That’s what college basketball is all about.”