Toppers storm back from early deficit to beat UT-Arlington, 77-72 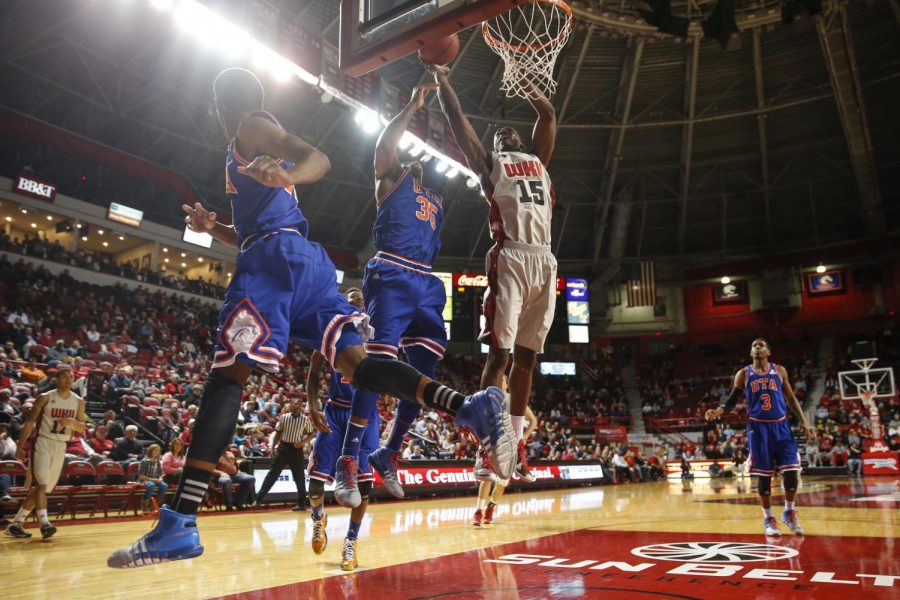 “I don’t have any 15-point plays,” WKU coach Ray Harper said. “How you (come back) is get good shots, get great shots, make the extra pass. We had too many one pass possessions in the first half, everybody trying to do it on their own. In the second half, I thought we got better at that.”

Freshman guard Chris Harrison-Docks led the Toppers in the first half with 15 points.

“I always think that we have the team to come back and win,” Harrison-Docks said. “I just think that we can’t keep getting off to these slow starts, you know, we always end up getting down and always end up fighting back and that shows a lot of character that we can do that. But I think the sooner we can come out and stay on top, stay ahead, we’ll even continue to get better than we have been.”

WKU played without sophomore center Alex Rostov, who missed the game with a blood clot in his upper extremity, but senior forward O’Karo Akamune stepped up with nine points and nine rebounds, filling in as the anchor in smaller lineups.

“I thought his energy was the difference in the basketball game,” Harper said. ”I don’t know that there was one possession in the game that I saw O’Karo take the possession off. He just didn’t; he was alert. He went to try to rebound it. The mistakes he made tonight, they were because he was too aggressive, they were not because he was not alert and reacting slowly. He was terrific.”

With the Mavericks up 24-9 at the 11: 19 mark of the first half, a jumper from junior guard Trency Jackson and a three-pointer by freshman guard Payton Hulsey brought the Toppers within 10 and Harrison-Docks’ three-point play cut the lead to seven. That lead was eventually cut to four, 35-31, when Harrison-Docks knocked down another long range jumper, his fourth of the first half.

Moments later, a long UTA offensive possession, cluttered with boos from Toppers fans who thought they saw a couple of traveling violations, ended in a Dowell three-pointer late in the shot clock. That bucket gave the Mavericks a seven-point, 40-33, lead into halftime.

“We didn’t focus on our scouting report; stopping the guards from shooting threes, staying in the gaps between, and helping each other,” Akamune said. “We did pick up the energy as well, along with the focus. We came together. We knew we had a deficit, but we came together as a team and worked hard to come back.”

The Mavericks’ lead ballooned to 12 points, but the Toppers clawed back, slicing that lead to five, when Price finished a bucket, was fouled and sunk the ensuing free throw. On WKU’s next possession, Price grabbed an offensive rebound and kicked it out to an open Brandon Harris. The senior netted the long range shock, cutting the lead to two and sending Diddle into a unanimous ball of fire and cheers.

The Toppers had several chances to tie or take the lead midway through the second half and finally did, knotting things up at 57 when Fant knocked down a pair of free throws. The junior fouled out of the game with 1:41 left to play with 11 points and six rebounds. From there it was back and forth: every UTA bucket was followed by a WKU answer. Brandon Edwards drained a long three and Price answered immediately with a deep trey of his own.

With 3:59 left to play, WKU took its first lead, 63-62, after Price split a pair of free throws. UTA fought, hitting a number of big, late buckets in a row, but the Toppers were solid shooting free throws down the stretch and a costly turnover from Lonnie McLanahan with 15 seconds left sealed the WKU win.

The Toppers will continue Sun Belt play Saturday when they host Texas State at 7:00 p.m. CT.