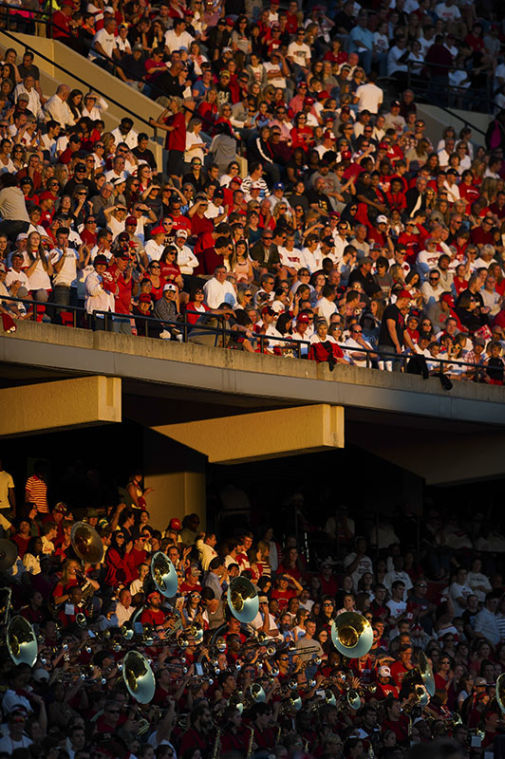 WKU fans watch Western take on Morgan State during their game at Western Kentucky University on Saturday, September 21, 2013. Western would go on to win 58-17.

Another football season, and another year of bowl eligibility. This has been the trend for the WKU football team for the past three years. But despite having their best season ever in the Sun Belt conference, the Toppers will not be going to a bowl game for the second time in those three years.

There are a number of reasons why the Hilltoppers could make a definitive argument for a bowl game this year. They posted an 8-4 record, two games above the minimum to be bowl eligible, had one of the biggest names in college football coaching the team in Bobby Petrino and one of the statistically best offensive players in the country in senior running back Antonio Andrews.

So why would the team who beat five bowl eligible teams be left out once again?

When asking WKU students this question many words like snubbed, cheated and upset were used. Students have seen the BCS system move in directions away from the Hilltoppers over the past three years.

“I’m very upset,” Louisville freshman Blake Johnson said. “I attended every home game I could this year and hate to see the Tops go out like this.”

Johnson is not the first or last person that felt they were cheated from one more WKU game this season. Several students took to social media after the official announcement was made expressing their disappointment of the decision.

What really got the students like Louisville sophomore Jack Roller fired up was when they realized Arkansas State made a bowl game over WKU despite losing to the Toppers head-to-head and with a worse record.

“We should have made a bowl game solely on record but when they (Arkansas State) made it, it was insult to injury,” Roller said.

Another advantage students were quick to point out was that WKU played better when it really counted. The Toppers affiliation with the Sun Belt Conference only guarantees two teams would get a bowl game. But some students believed the team’s hot streak at the end of their schedule was enough to earn a bowl.

“It doesn’t matter what conference you’re from, when you win your final four games it’s obvious the team has improved.” Freshman John Reecer said.

Many fans realized a huge another potential reason on why the Toppers didn’t make a bowl game this year was because of them. Attendance at the potential bowl game was questionable for the Bowling Green fan base. But the numbers show that the average attendance was higher than any other season in WKU history – increasing by almost 1,000.

However, athletic director Todd Stewart believed even if Smith Stadium was sold out for every game, it wouldn’t have made much difference in the bowl committees’ selections.

“We could’ve sold out Houchens-Smith Stadium and I’m not sure it would’ve been enough to overcome that,” Stewart said. “However, certainly year-in and year-out attendance is huge, and we need to fill that stadium on a regular basis. There’s no reason why we can’t have 20,000-plus at games. And it’s heading in the right direction.”