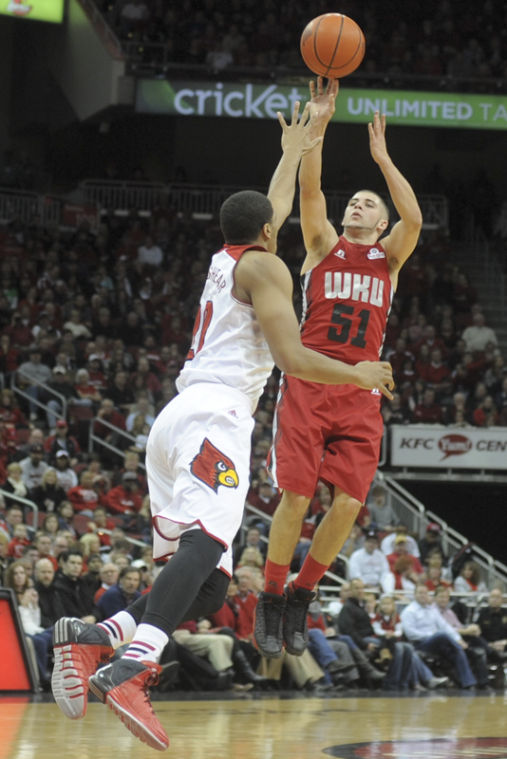 Freshman guard Chris Harrison-Docks shoots over Louisville junior guard Wayne Beshear during the game at KFC Yum center in Louisville, Ky. on Dec. 14. Harrison-Docks had 10 points and rebound in his season debut on Saturday.

Tyler Lashbrook
It was a mixed bag of results, but transfer guards Trency Jackson and Chris Harrison-Docks made their debuts as Hilltoppers on Saturday.
Jackson, a redshirt junior, started at point guard, scoring six points and recording two assists in 28 minutes. He shot poorly from the field (2-of-13), but even the untrained eye could see his explosiveness with the ball in his hands.
Listed at 6-foot-2, Jackson is a strong, powerful guard with the speed of a running back and tight ball-handling skills. He took the daunting task of checking Louisville’s Russ Smith, one of college basketball’s elite scorers, and held him to 14 points on 16 shots.
But it was Harrison-Docks, a redshirt freshman, the less hyped of the two newcomers, who made the biggest surprise. He scored 10 points off the bench, connecting on four shots, two from behind the arc. He calmly ran the offense against a feisty Louisville full-court press and played like a solid starting point guard.
Coach Ray Harper called the two “guys that are really going to help us as we go forward.”
“It’s difficult to play for the first time after sitting out a year. It just is,” Harper said. “It’ll usually take two or three games to really get your game legs under you. At the same time, I’ve watched these guys practice and how hard they practice and what they bring to this team.”
Jackson and Harrison-Docks have been practicing with the Toppers since January.
“I just felt that I couldn’t looked at it a lot of different ways and not played them as much,” Harper said. The two combined for 52 minutes. But we’re trying to get better each day and I think these two are going to helps us do that.”
Harrison-Docks called it a “relief” to finally get on the floor.
“It felt good to be out there with my team,” Harrison-Docks said. “You know, me and Trency have been playing since January practicing so for us to finally get the opportunity to play and compete, you know, it definitely feels good.”
Delete Image
Align Left
Align Center
Align Right
Align Left
Align Center
Delete Heading