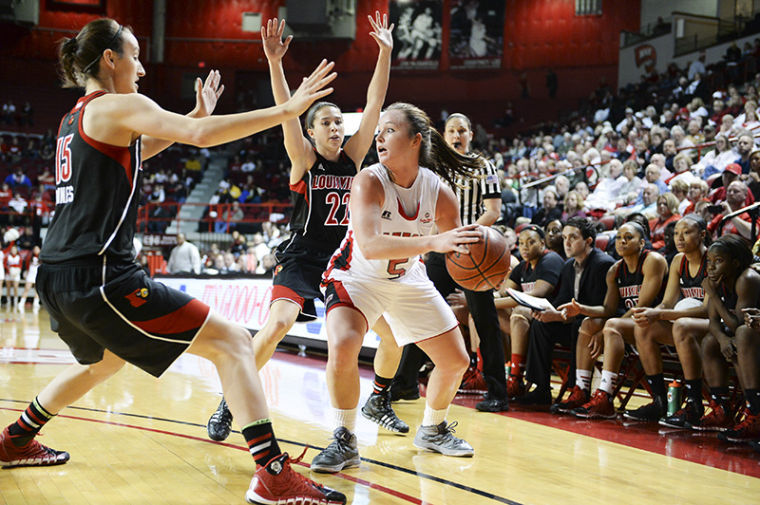 The Lady Topper basketball team split its two games over Thanksgiving break, dropping a home game to defending NCAA Tournament runner-up No. 4 Louisville on Wednesday and picking up a rebound win over Morehead State on Sunday.

WKU (5-2) has won 18 of 21 games following a loss under coach Michelle Clark-Heard. The team is 11-2 overall in bounce-back games.

The Lady Toppers’ 74-61 loss to No. 4 Louisville (7-1) marked the first time WKU has hosted a top-five opponent since No. 4 Vanderbilt came to Diddle Arena in 2001. Before Wednesday, WKU had won 11 of the past 15 meetings with Louisville.

The Lady Toppers trailed by as much as 16 in the first half and were down by 10 through the first 10 minutes before senior guard Bianca McGee scored five straight to bring WKU within five points.

Heard said the Lady Toppers demonstrated resiliency to come back from a large early deficit.

“It shows the fight and the determination of this team,” Heard said. “…I feel like if I was in the crowd today, I know I would have been excited about what I saw. I was proud of our girls.”

Despite coming within three points of the Lady Cardinals on several occasions, Louisville opened up the second half shooting 11 of 14 from the floor and opened up a 19-point lead with roughly seven minutes remaining en route to a 74-61 win.

Junior guard Alexis Govan said despite the result, the Lady Toppers know they left it all on the court against the Lady Cardinals.

“We fought as hard as we could for as long as we could,” Govan said. “We didn’t step back and we didn’t cower down. They’re a really good team and we could have folded…but we didn’t. We fought to the end.”

Despite a slow start, the Lady Toppers improved to 22-10 against Morehead State with a win on Sunday behind 30 points from the WKU bench.

The Lady Toppers led by one point with just under 18 minutes left in the first half and didn’t lead again until Govan propelled WKU to a 10-0 run with roughly three minutes remaining in the half.

WKU continued its strong play in the second half, opening on a 16-2 run behind 5-of-8 shooting. The Lady Toppers also forced eight MSU turnovers in the first 10 minutes of the second half.

WKU rode its bench for the majority of the second half on the way to a 65-52 win over the Lady Eagles. The Lady Toppers outscored MSU 30-9 in bench points.

McGee, who tallied 15 points on seven shot attempts, said the Lady Topper bench is always ready to provide a jumpstart for the team if necessary.

“Whether it’s practice or a game,” McGee said. “Everyone on the team is just as important as the first five out there. If they need a spark…we’re supposed to be ready when our number is called.”

WKU will be back on the court on the road Saturday against Ball State.