Aulbach: A closer look at the early end to WKU’s season 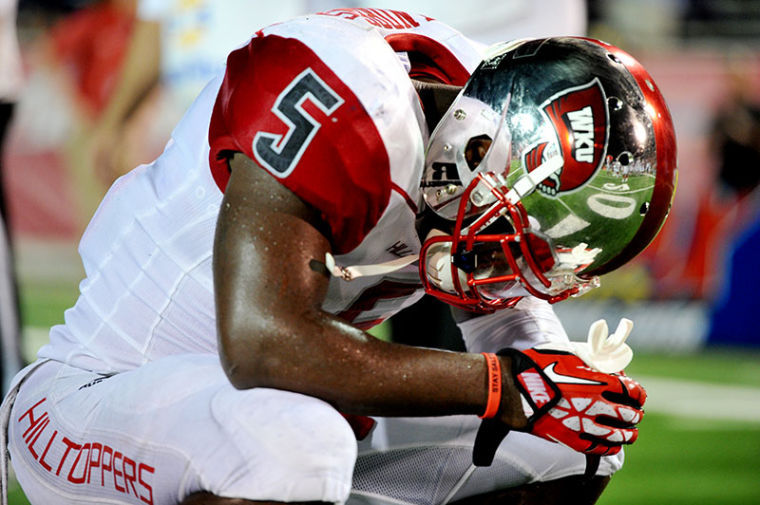 WKU running back Antonio Andrews kneels on the field after losing the game to South Alabama.

During the last month of the regular season, the Toppers finally looked like a consistent, winning team — a team you’d want to watch in December or January. Instead, for the second time in three years, a bowl-eligible WKU football team will not participate in the postseason.

The Toppers had everything bowl committees usually look for in a postseason team. WKU (8-4, 4-3 Sun Belt Conference) had the big-name coach, one of the best running backs in the country, and a four-game winning streak that left the team playing its best ball of the season.

Athletics Director Todd Stewart didn’t mince words when he broke the news Sunday night — he thinks WKU would have picked up its ninth win.

“I think if we had gotten into a bowl game we would have won it, because we played so well down the stretch — winning seven of nine and four in a row, I believe we would have won the bowl game,” he said. “Obviously we’ll never know that, but a lot was achieved this year and I hope when we get past the disappointment of today of not making a bowl game that the legacy of this team and of these seniors is really how far this program has come over the last five years and all that was accomplished this year. It positions us very well as we move forward.”

A couple of factors were enough to keep WKU as one of nine bowl-eligible teams that will be on the outside looking in this month, though.

First of all, there were an over-abundance of teams that had the six wins needed to qualify for the postseason.

Two years ago, the Toppers and Ball State were the only two bowl-eligible teams that didn’t make one of the 70 open slots for the 35 total bowl games. Last year, two teams — a 9-3 Louisiana Tech team and 8-4 Middle Tennessee — were left out in the cold. With 79 teams eligible this year, WKU will join teams like Toledo (7-5), Florida Atlantic (6-6) and others on the outside looking in.

Another factor, like it or not, was attendance. Average home attendance — announced as 18,334 — may have been at an all-time high this year, but that figure trailed off towards the end of the season as the stakes continued to rise for the team.

Stewart, for his part, said with nine teams getting left out of the postseason picture this year, attendance was not the reason the Toppers’ season is over early.

“We could’ve sold out Houchens-Smith Stadium and I’m not sure it would’ve been enough to over come that,” Stewart said. “However, certainly year-in and year-out attendance is huge, and we need to fill that stadium on a regular basis. There’s no reason why we can’t have 20,000-plus at games. And it’s heading in the right direction.”

It goes beyond the numbers, though. WKU’s final game, an exciting last-minute win over Arkansas State with the season on the line, was played in front of what looked like a half-full Smith Stadium. Yes, it was over Thanksgiving break and yes, average attendance this year was at an all-time high, but that was not a good look to the bowl committee members in attendance.

Near the end of the first half after a key turnover by the Toppers, chants of “A-S-U! A-S-U!” from the Red Wolves’ fans in the crowd were audible in a press box that was full of GoDaddy.com Bowl representatives.

The GoDaddy Bowl reps have said they picked Arkansas State, which finished ahead of WKU in the conference standings despite having a worse overall record and head-to-head loss, because they wanted the second-place team in the Sun Belt play the second-place team in the Mid-American Conference, and that makes sense. But hearing cheers for the Red Wolves inside the walls of Smith Stadium didn’t make it a hard choice for them.

When it comes to the case of why the Toppers didn’t make the postseason, though, Exhibit A is their conference affiliation.

An 8-4 team from Conference USA makes it to a bowl game, no question. There were eight bowl-eligible teams in C-USA and only two — a 6-6 FAU team and 7-5 squad from Texas-San Antonio — will be staying home this postseason. The MAC, another conference closer to the Sun Belt’s level of competition, is sending five of seven bowl eligible teams as well.

These conferences are getting teams into bowls because they have more automatic bids. The top six teams in C-USA are given bowl bids due to an agreement between the conference and six games. The MAC, meanwhile, has three automatic bids and is the first alternative for several other bowls if they have openings.

The Sun Belt has two automatic bids — one given to the conference champion (Louisiana-Lafayette this season) and one to another bowl-eligible team (usually the No. 2 team in the conference, as is the case this year with Arkansas State). Once you get past that, a Sun Belt team needs a lot of luck to pick up a postseason berth. With 79 teams getting the six wins needed to qualify for a bowl, there just wasn’t enough room in the picture for another SBC squad.

“Certainly having two bowl games is not helpful,” Stewart said about the Sun Belt. “I mean, if you don’t win the league, you’re behind the 8-ball. That’s true for everybody in the league, and that’s just the reality of it.”

This won’t be the case next year, of course. WKU is set to join C-USA on July 1, 2014, meaning greener pastures and brighter days and probably a few more losses along the way as the Toppers become a part of the largest mid-major conference in the FBS.

The future of the Topper program had Stewart sounding upbeat despite the disappointing end to the season, but the thought of success in C-USA couldn’t take away the bitter taste of the end of the 2013 season.

“That’s helpful moving forward — it certainly doesn’t help this year’s team and it doesn’t help our seniors, and that’s who I really hate it for,” Stewart said.