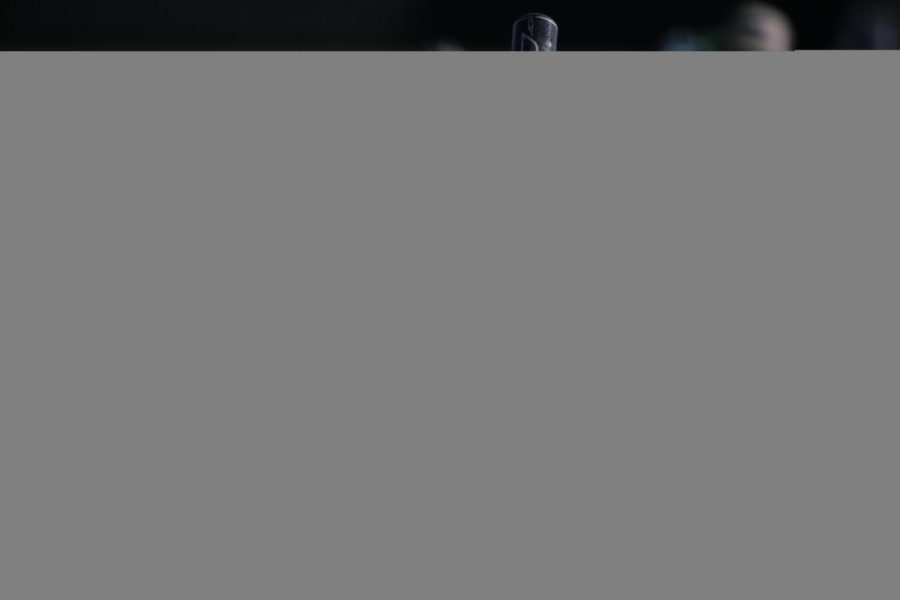 Sophomore Jackson Swiney at the plat against Marshall on April 9, 2021.

“Winning is hard, it’s a challenge and it’s not easy to do and these guys worked at it this week, and it’s great to see them come out with two wins,” head coach John Pawlowski said.

WKU’s sophomore Jackson Gray went 2-for-4 with the walk-off homerun in game one.

Sophomore Luke Edwards went 4-for-6 with a double for Marshall.

Redshirt sophomore Jake Kates got the start for WKU. He tossed for a complete seven inning game allowing five hits with eight strikeouts.

“I thought we were awesome. I was happy with my performance and then collectively I thought we played great too,” Kates said.

For Marshall, freshman Chad Heiner got the call to start. He pitched for a complete seven inning game allowing two hits with four strikeouts.

Edwards led-off the game with a single in the top of the first frame for Marshall, but Edwards was caught trying to steal second to end Marshall’s first scoring opportunity. WKU went three up and three down in the bottom of the first frame.

After both teams had nothing to show in the second inning, Marshall got the bats going with one out on consecutive singles from freshman Devin Ward and Edwards in the top of the inning.

Kates loaded the bases with a walk, Marshall senior Zach Inskeep grounded into a double play to get Kates out of a bases loaded jam.

Redshirt freshman Hunter Evans got the first hit for WKU in the bottom of the third frame, but was thrown out at second base on a fielder’s choice to end the third inning.

In the fourth inning, both teams had nothing to show for with a combined for one hit. In the fifth frame both teams went three up and three down. Both pitchers through five innings having allowed five combined hits while allowing no runs scored between them.

After both teams went three up and three down in the sixth frame, freshman Ryan Leitch led off with a single in the top of the seventh inning. Leitch then advanced to second base on a sacrifice bunt before Kates struck out the next two batters to leave him stranded on second base.

In the bottom of the seventh inning with two outs, Jackson Gray hit a walk-off homerun to win the game for WKU 1-0. Kates picked up his third win of the season.

“I think he left a change-up up a little bit in the zone, and he had done that earlier in the game a couple of times to me, and I didn’t quite pull the trigger, so I was kind of ready for that pitch and got the barrel around,” Gray said.

WKU junior Sean Bergeron got the start in game two. He pitched in all seven innings allowing one run while picking up four strikeouts.

“I felt I did pretty good. I filled up the strike zone to give something for my defense to work with that they needed to and the hits came whenever they needed to, so it was a productive day,” Bergeron said.

Freshman Patrick Copen got the start for Marshall in game two. He tossed for two innings allowing one run and no hits.

Edwards doubled to lead off the game. After he advanced to third on a ground out, junior Peter Hutzal hit a sacrifice fly to score Edwards. Bergeron struck out Leitch to end the top of the first frame.

In the bottom of the first frame, senior Ray Zuberer III walked with one out, then advanced to second on a wild pitch. After a failed pickoff attempt by Copen, Zuberer scored to tie the game at one apiece on a Gray sacrifice fly.

In the second inning both teams went three up and three down.

In the bottom of the third inning, senior Michael Guerrero relieved Copen on the mound Marshall. Sophomore Matthew Meyer then doubled with one out. A hit by pitch put WKU runners on first and second base, junior Justin Carlin singled to score Meyer giving WKU a 2-1 lead.

Marshall made another pitching change going to lefty freshman Cody Sharp. After Sharp walked Gray, graduate Davis Sims grounded into a double to get Sharp out of a bases-loaded jam.

Marshall did not retaliate in the top of the fourth frame. WKU loaded the bases on walks before Meyer singled to extend the WKU lead 3-1.

Both teams had nothing to show for in the fifth frame. Marshall went three up and three down, while Gray was left stranded after doubling for WKU.

In the top of the sixth frame, Marshall led off with back-to-back singles from freshman Josh Pigozzo and Edwards. Following a flyout, Pigozzo got thrown out before he could make it back to second base. Edwards was then left stranded on second base after a flyout.

In the bottom of the sixth frame, WKU tacked on two more runs on a sophomore Ricardo Leonett sacrifice fly and a fielder’s choice to make the score 5-1.

Marshall could not get the bats going in the top of the seventh inning. Bergeron finished his complete seven game performance with a strikeout to end the game. WKU won game two 5-1.

“They just need to keep working and that’s the resounding theme that we tell our guys,” Pawlowski said. “Baseball is an unforgiving game sometimes and you can hit balls, cue-shots, off the end of the bat and get jammed and find ways to get hits, so they just have to stay with the process and they know what that is.”

Up next WKU host Marshall for a nine inning affair on Saturday at 2 p.m.