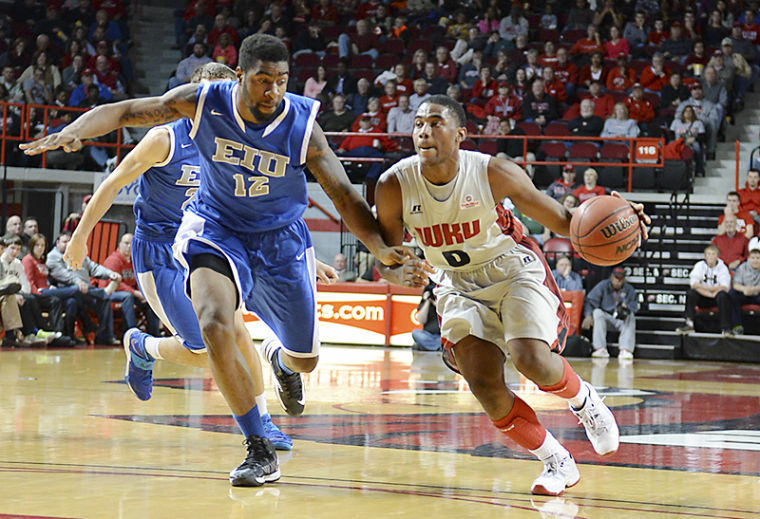 The Toppers are a markedly different team on the road than they are at home.

Through seven games, WKU (4-3) has amassed four wins — each within confines of Diddle Arena. The team’s three losses, meanwhile, have all come on the road.

However, WKU will have a chance to right its road woes Saturday in Carbondale, Ill., against Southern Illinois.

“They’re definitely going to zone us,” Coach Ray Harper told WKU Radio after the Toppers’ 74-62 at Bowling Green State. “Why wouldn’t they? I mean, we’ve not proven through seven games that we’re very good against zone.

“At times, I don’t know what else we can do,” he said. “We get the ball in great spots. But we’ve got to look at film and try and figure out some other ways to possibly score.”

Teams use zones to bait their opponents into shooting from downtown. Through seven games, WKU has seen a lot of zone and is hitting three-pointers at just a 28.3 percent clip. The team is shooting a hair under 39 percent from the field.

SIU (2-6) is traditionally a good basketball program, but the team has struggled early this year and has split their two home games. They are led by 6-foot-5-inch senior guard Desmar Jackson, who is averaging 21 points and 4.6 rebounds per game this season.

After WKU’s loss Monday night, Harper said his team has to be mentally tough.

“That’s how you win on the road — is being mentally tough,” Harper told WKU Radio.

On Saturday night, after a hot second half in which the Toppers shot 14-of-21 of the field, junior forward George Fant said the team doesn’t need to change philosophies to win on the road.

“There’s not too much to correct,” Fant said. “You just got to win a game. It all comes down, ultimately, to winning the game.

“We have a team that can go out and play and win,” he continued. “I don’t think that any of our away games were just, you know, us getting beat. I think we were just beating ourselves. We’ve just got to go out there and play our game and capitalize on positions that we have and just score the ball and win.”

Junior guard Kevin Kaspar, who had three rebounds on Monday, said he agreed with Fant’s assessment that, home or away, it’s a matter of the Toppers beating themselves.

There are currently three important players out for the team, and their absence may have contributed to the slow road start.

Dickerson’s status for Saturday night is unknown, but Jackson and Harrison-Docks are cleared to compete on Dec. 14 when the Toppers play the defending NCAA champions, the University of Louisville Cardinals.

“You’re looking at three scholarship guards not playing right now,” Harper said. “And I guarantee when they are eligible and healthy, they will be playing a lot. A whole lot.”