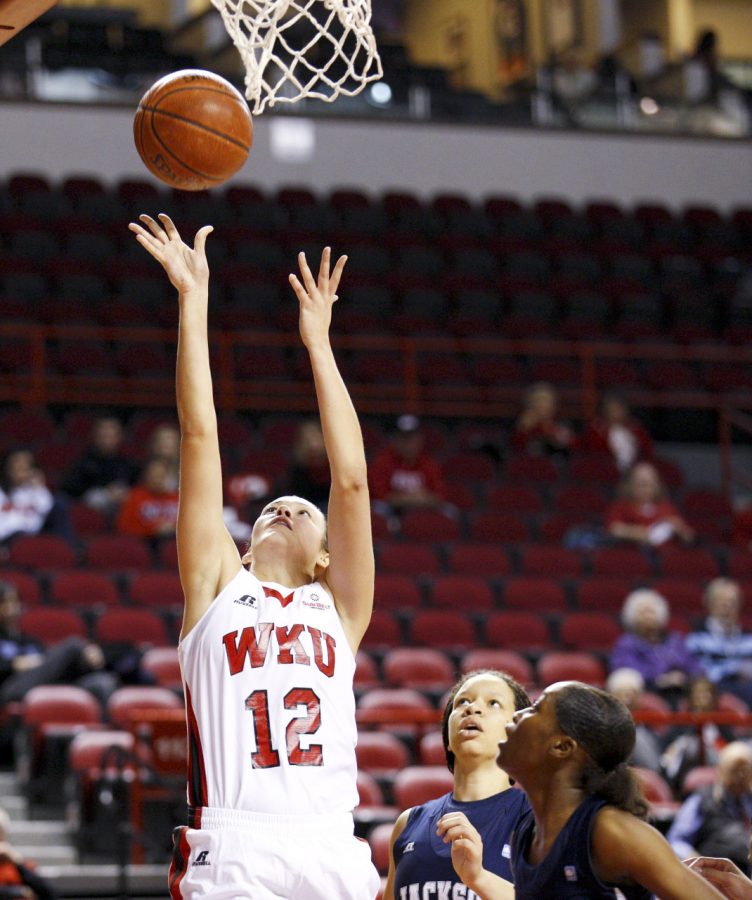 Freshman guard Kendall Noble makes a layup during the first half of WKU's game against Jackson State Sunday, Dec. 15, 2013, at Diddle Arena in Bowling Green, Ky. The Lady Toppers lead 46-21 at the half.

The Lady Toppers improved to 4-1 at home this season with a deciding 83-48 win over Jackson State on Sunday in Diddle Arena.

WKU is now 12-2 in bounce back wins under Michelle Clark-Heard after dropping last week’s contest at Ball State.

The Lady Toppers opened up an 18-8 lead in the game’s first eight minutes behind nine points from junior guard Alexis Govan. The WKU lead ballooned to 32-10 with eight minutes remaining in the first half following three triples by senior guard Chaney Means.

Heard said she was pleased with the mentality of her team coming out of the locker room.

“I was very happy with the way we started out,” Heard said. “Just to have to opportunity to jump on a team and work on some different things.”

WKU led by as many as 30 in the first half and shot 60 percent from the field while holding JSU to just 31 percent. The Lady Toppers also outscored JSU 23-7 in bench points in the first 20 minutes.

With roughly 16:48 remaining in the second half, Govan nailed a free throw to extend her consecutive double-digit scoring streak to 45 games, which is a top-10 active streak in the NCAA.

The Lady Toppers used 45 percent shooting in the second half to secure a win in the team’s final non-conference home game of the season.

Freshman forward Bria Gaines led the way for WKU with 15 points and 12 rebounds. Govan tallied 13 points in just 18 minutes and junior forward Chastity Gooch recorded 12 points and 13 rebounds. The Lady Toppers assisted on 20 of WKU’s 31 made field goals and forced 23 JSU turnovers, 16 of which were steals.

Gaines said she’s been working hard in practice, so it was nice to reap the benefits against JSU.

“In practice I’ve been working really hard on my defense,” Gaines said. “Just trying to be able to be out there and help Chastity and Jalynn (McClain) out in the post.”

The Lady Toppers are back in action against Belmont on Dec. 20 in the 2013 Puerto Rico Classic.