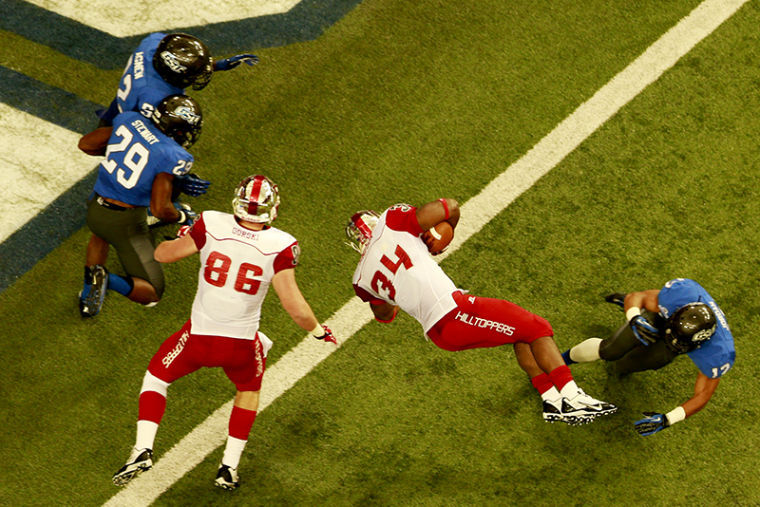 WKU’s offense spread the wealth among the backfield. Simpson’s four touchdowns only came off of 25 yards rushing on 10 carries, but the team as a whole pushed for 203 rushing yards. Senior running back Antonio Andrews rushed for 110 yards on 22 carries and sophomore running back Leon Allen added another 61 yards to the mix.

WKU once again out gained its opponent on offense, but it wasn’t by much Saturday. WKU’s 444 offensive yards just edged the Panthers’ 410 yards.

“I think all week long we’ve had a good attitude, we’ve worked hard in practice and prepared well,” Petrino said. “I think they came out today and had fun out there and played hard. We didn’t do everything right, but we came out there and executed and we were able to score enough points and defend well enough to get a win.”

Junior quarterback Brandon Doughty left the game in the third quarter after a hit to the head while sliding on a scramble. He finished the game 15-of-24, 206 yards and a touchdown. Petrino said he is optimistic about his quarterback returning soon, but the situation isn’t clear yet.

“I think he’s going to be okay, but you never know” Petrino said. “It was a big hit. It was a situation where he wasn’t able to return to the game. I’m hopeful he will be okay, but we won’t know until tomorrow.”

WKU led 31-7 at one point in the third quarter before Georgia State rallied a 14-0 scoring spree, part of a trend of second half worries the team has dealt with all season. To prevent that, the offense turned to its strengths by rushing for 140 yards in the second half.

Petrino was pleased to see the team took over the line of scrimmage and powered behind the offensive front. Simpson said he credits the offensive line for the keeping the team up in the second half.

“We didn’t lose any of the focus that we lost last weekend,” Simpson said. “We continued to make big plays and came together as a team to make sure we got the victory.

“I’d like to thank my offensive line and fullbacks. Without them I couldn’t have done it. I feel like if we put anybody back there we could have run behind them.”

WKU’s win puts them one game away from becoming bowl eligible – that fact, according to sophomore linebacker Daqual Randall, gives them confidence after finally getting back on the winning edge.

“It was good to keep the team going for a bowl shot,” Randall said. “Nobody likes to be on the losing side, so it was good to go out and get that ‘W'”.

WKU started the game with short field at the Georgia State 40 yard line. Doughty led a 12-play scoring drive as Simpson touched the ball three times and scored on a two-yard run to put WKU up early 7-0.

After stopping the Panthers on a three-and-out, WKU went to work from its own 20 yard line. Doughty escaped a sack and completed a 36-yard pass to freshman wide receiver Nicholas Norris over the middle. The Toppers would eventually settle for a 40-yard field goal from sophomore kicker Garrett Schwettman.

Georgia State responded when Robert Davis beat senior cornerback Tyree Robinson down the sideline and juggled in a 67-yard touchdown pass, the second-longest scoring play WKU has given up this season.

Up 17-7 nearing the half, WKU got the ball right back with under two minutes to play where Doughty and the offense went right back to work. Doughty sold the play action and found junior wide receiver Willie McNeal on a 44-yard pass to the GSU 31-yard line. The play action worked once again as Doughty found a wide open senior fullback Kadeem Jones for a 16-yard touchdown – the fullback’s first score of the year.

After Doughty left the game in the third quarter, the offense was able to punch in another 2-yard run from Simpson before Georgia State’s 14-0 run.

In the fourth quarter, Andrews handled the ball for eight carries and Simpson capped off the drive with another short touchdown to give the Toppers the 38-21 lead.

Fishback would later find sophomore tight end Tim Gorski for a 5-yard touchdown toss to extend the lead even more, but Georgia State would score in the final two minutes to make the final score 44-28.

Petrino said he saw some things his team can improve on, but he was pleased with his players’ attitudes during the game.

“I thought our players stuck together,” he said. “We could get better at football things as long as we stick together as a team.”