Lady Toppers look to put Vandy loss behind them 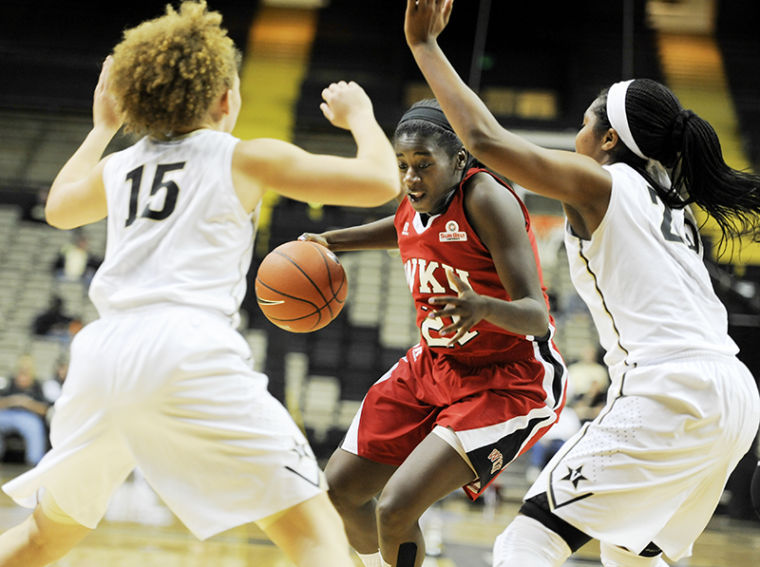 After falling 85-60 to Vanderbilt in Nashville on Monday, the Lady Topper basketball team will look to right the ship in their third regular season matchup against in-state rival Murray State on Saturday.

WKU led Vandy by as much as nine points before the Lady Commodores opened up a 20-point lead in the second half following a 37-8 run. Junior guard Alexis Govan and senior guard Bianca McGee led the Lady Toppers with 18 and 15 points, respectively.

The Lady Toppers, who are a combined 21-2 at home against Murray State, beat the Lady Racers in Murray 80-69 last season. WKU has built a combined 34-10 record versus the Lady Racers dating back to their first meeting in the 1928-29 season.

Coach Michelle Clark-Heard said the Lady Racers will test the Lady Toppers and her team needs to focus in order to come out with a win.

“We’ll work on a lot of different things,” Heard said on Wednesday. “Defense in transition, guarding the three. Murray State is going to come in and shoot a lot of threes and get up and down the floor…I think the biggest thing is just getting our mentality right.

“They’re going to press us. They shoot really fast, so we’re going to have to rebound…they’ll be ready for us. It’ll be a big test.”

Vanderbilt ended the first half against WKU on Monday with an 18-3 run before ultimately extending that run to 37-8. Govan said after the loss to the Commodores on Monday that the Lady Toppers need to keep their head up and fight through adversity instead of getting down on themselves.

“Coach tells us all the time that great teams make runs,” Govan said. “We just have to be able to roll with the punches and keep playing.”

WKU and the Lady Racers will tip off at 2 p.m. Saturday at Diddle Arena.