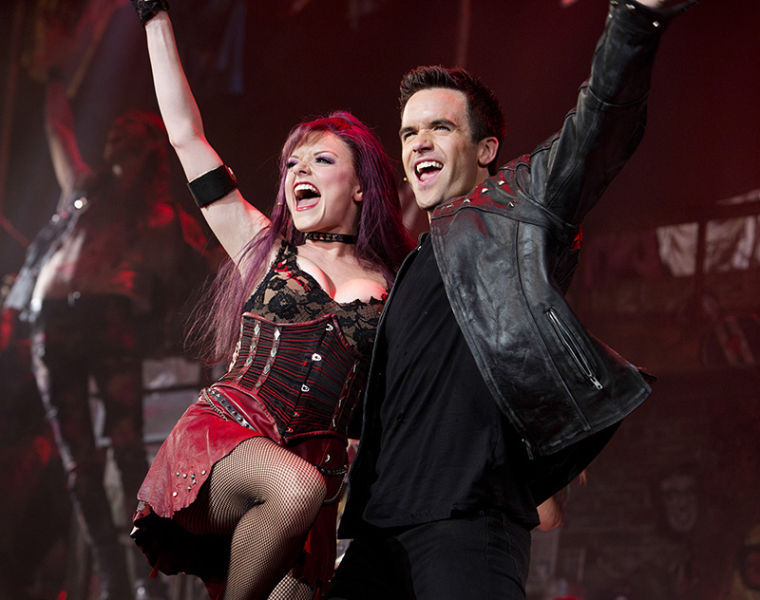 WKU alumni Ruby Lewis and Brian Justin Crum in the national tour of We Will Rock You.

When most people think of Queen songs such as “Bohemian Rhapsody” and “We Are The Champions,” they probably just think of songs that are fun to rock out to with friends.

But to one WKU theatre alumna, these songs mean something different — she is spending months on tour performing these hits, along with many other Queen favorites.

Ruby Lewis, 2007 WKU graduate from Shelbyville, plays the role of Scaramouche in “We Will Rock You,” an award-winning “rock theatrical” built around 24 of Queen’s biggest hits. The musical will rock the Tennessee Performing Arts Center’s Andrew Jackson Hall from Nov. 12-17.

“Scaramouche is the female protagonist,” Lewis said. “She and Galileo have just graduated high school and find themselves free-thinkers in this futuristic society where being an individual is essentially illegal.”

Lewis said Scaramouche and Galileo meet a group of people called Bohemians who live in an underground world within a Hard Rock Café. Inside the café, there are rock and roll artifacts that prove there was a time when people created their own music.

“We go on a quest to bring back rock and roll,” Lewis said.

Lewis said this is her first lead on a tour.

Lewis said she’s worked very closely with Ben Elton, a celebrated British comedian and writer who created “We Will Rock You,” along with Brian May and Roger Taylor from Queen, who are musical supervisors to the show. Lewis also got to meet and take pictures with Robert De Niro, who is a co-producer of the musical.

“The tour has been very star-studded, and it’s very exciting,” Lewis said.

Scott Stroot, a WKU professor of theatre and dance, worked with Lewis during her time at WKU when he was a teacher and director and even shared the stage with her.

“None of her success is a surprise,” Stroot said. “She’s a true triple threat —she can sing, act, and she’s a good dancer. She’s drop-dead gorgeous, too, and that doesn’t hurt.”

Stroot said Lewis was always a hard worker and took her work seriously.

“It was clear that she was pretty special, and if she wanted to do this for a living, she probably could,” Stroot said.

Stroot said he can recall the first time he heard Lewis sing.

“I heard this amazing voice onstage, and I had no idea who it was,” Stroot said. “I tracked it down, and sure enough, it was Ruby.”

“That was the moment when I and other professors went, ‘Whoa, okay,’” Stroot said. “We had never heard her, so we didn’t know what she was capable of. She showed her true colors from then on in one big role after another.”

Stroot said Lewis was an absolute dream to work with.

“Her work ethic and sense of professional decorum really made her a pleasant person to be around, which is not always the case with the very talented,” Stroot said. “In Ruby’s case, that beginner’s mind and humility was just another thing that makes her really special.”

Lewis said the advice she would give WKU students now is different than it would have been a couple years ago.

“Your main focus should be on being a really good person, making a lot of connections and also being an interesting person,” Lewis said. “Not just focusing on audition material or stapling headshots to your resume, but instead traveling, escaping to somewhere weird for a weekend, working on a hobby.”

Lewis said the way to get hired is to make people see something in you that’s unique and interesting.

“Make them see that you’re hungry for life,” Lewis said. “That’s what keeps an actor working.”