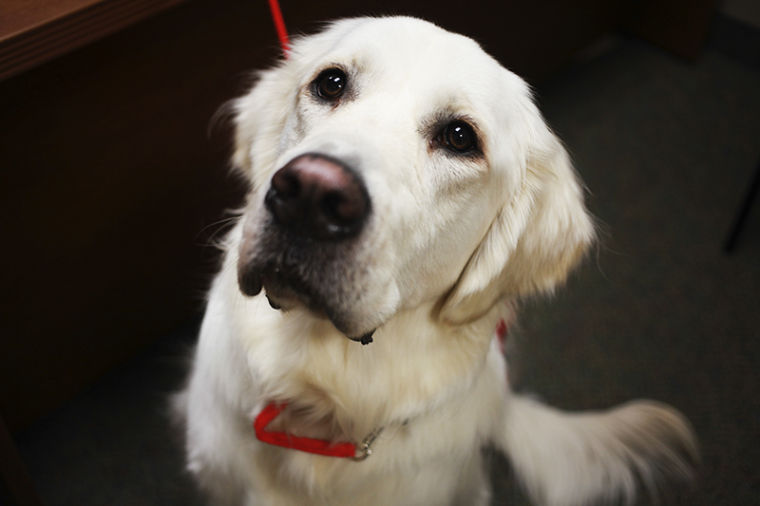 CanDoo, a two-year-old cream-coated Golden Retriever, works with both the office of Military Student Services and the Kelly Autism Program to assist students through stress and anxiety.

At 2 years old, most dogs would not be expected to calmly sit with children from ages 7 and up, not to mention work with individuals experiencing problems with anxiety. CanDoo is not like most dogs.

CanDoo, an English cream golden retriever, conjointly works with the Kelly Autism Program and Military Student Services as a therapy dog. He has been at WKU since mid-October and has already proved to be an asset to both programs.

Marty Boman, director of the Kelly Autism Program, or KAP, is CanDoo’s primary caregiver when he is not on campus, and she was thrilled about his quick, affirmative impression.

“We’ve already seen changes in our participants. CanDoo is definitely making an impact,” she said.

CanDoo provides a comfortable environment for students to learn and progress in. He spends the afternoons at the Clinical Education Complex, working with students in KAP.

School-age children can sit with him while explaining how their day went, and college students in the program have him there while working on homework at their study tables. He is a method of stress-relief, another focus of connection for the students.

Christina Noel, assistant director of KAP, is one of CanDoo’s handlers. She uses him in many of her sessions with students and said his comforting influence has been felt.

“I think he provides a safer place to talk about things that aren’t going well or to problem solve through things,” she said. “It’s more comfortable to be sitting on the floor with him than just talking to me in a chair.”

It is his disposition that enables his success with students, she said.

CanDoo is not only available to KAP students, however. He spends the mornings in Tate Page Hall 408 with Military Student Services, where any student can go see him until one o’ clock.

Tonya Archey, director of Military Student Services, said a survey showed some students, particularly freshmen, miss home to the point where they thought of it several times a day. That is where CanDoo came in, providing a piece of home on campus.

Archey said Candoo has been a valuable asset.

“We thought he would be another tool in our toolkit to help kids that might have anxiety issues,” she said. “Everybody deals with stress in different ways, and now here’s another coping mechanism for you, playing with CanDoo.”

Many veterans have found comfort visiting CanDoo. Archey said they may be stressed and need a few minutes between classes to rejuvenate before going about their day, and by simply playing with CanDoo, they were easily able to relieve anxiety.

Chicago sophomore Taylor Hansen recently has found herself overwhelmed as both a student and a cadet in ROTC. She said she woke up Tuesday morning feeling apprehensive about the day, so she decided to visit CanDoo on her way to class.

“He relieved a lot of stress in a little bit of time and really brightened my day,” she said. “It opened my eyes to what therapy dogs can do.”

Hansen thought it was CanDoo’s affectionate disposition that improved her mood.

“I sat down on the ground, and he tried to sit in my lap, like a cat. He’s just adorable, and I’ll be seeing him again,” she said.

CanDoo can frequently be seen walking around campus with one of his handlers. Students are urged to approach them, but Archey emphasized the importance of asking before interacting with him. It is vital not to distract a service dog from their objective, whereas CanDoo, a therapy dog, is trained to be social.

“He’s a therapy dog, so we want people to come up to him and love on him. That’s what he was trained to do, but we don’t want students to get him confused with other service dogs on-campus,” she said. “But, of course, if you ask us, we will say yes.”

Overall, CanDoo is a welcomed addition to both programs and has been wholly embraced by WKU. Archey said she is excited about CanDoo’s future with WKU.

“He’s just a plus all the way around, because of the diversity he’s going to bring to the university, the KAP program and the Military Student Services,” she said.