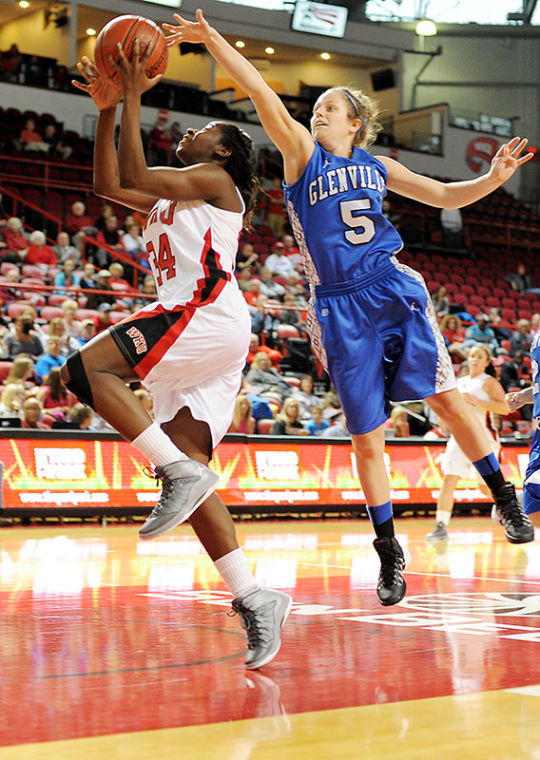 With two exhibition wins under their belt, the Lady Toppers are finally set to open the regular season this weekend.

After topping Kentucky Wesleyan on Oct. 29, the women’s basketball team wrapped up its stint of preseason exhibition games with a 100-67 win over Glenville State Sunday in Diddle Arena.

Led by junior forward Chastity Gooch and junior guard Alexis Govan, all 12 Lady Toppers scored or assisted on a basket in the exhibition.

Gooch finished with 22 points, seven rebounds, four assists and two steals, and she made 10-of-11 shot attempts in 24 minutes of play. Meanwhile, Govan tallied 17 points and six rebounds.

Sophomore forward Jalynn McClain flirted with a double-double as she recorded nine points and 10 rebounds before getting into foul trouble. Sophomore guard Micah Jones had 10 points and three assists and went two-of-three from three-point range.

Jones, who was the only Lady Topper to not turn the ball over against Glenville State, said WKU played into the opponent’s style of play at times and coughed the ball up as a result.

“I think we came out and executed well,” Jones said. “We had some points in the game where we didn’t do as great as we’d like to but overall…I thought we did pretty good.”

The Lady Toppers scored 38 points off the bench led by freshman forward Bria Gaines, who totaled 11 points and five boards in just seven minutes of play.

Coach Michelle Clark-Heard said although the Lady Toppers need to correct some miscues before regular season play, she was happy to get the chance to give the whole team a chance to play.

“We still have to work out some kinks,” Heard said. “But I was really excited and proud of the first group that they could put up the numbers that they did so I could get a chance to put a lot of people in and play some different combinations.”

WKU turned the ball over a combined 45 times during the two exhibitions, a statistic that the Lady Topper coaching staff seeks to address.

The Lady Toppers open the 2013-14 regular season against Austin Peay at 2 p.m. on Saturday in Diddle Arena.