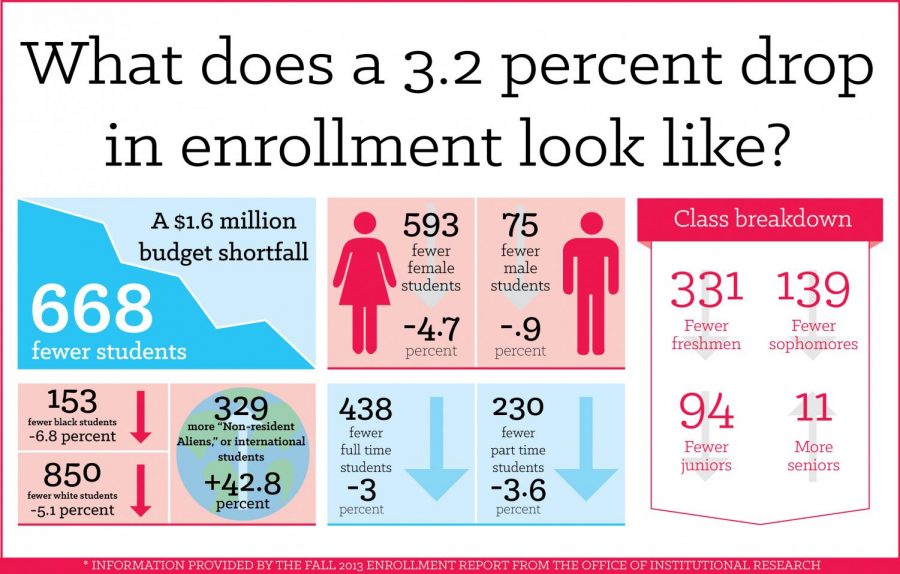 While most public universities in Kentucky saw an increase in total enrollment this fall, WKU is down 3.2 percent.

The enrollment gap translates to a $1.6 million gap in the university’s budget.

WKU and Eastern Kentucky University were the only two public institutions in the state to report a loss.

While some schools are feeling the blow, the University of Kentucky’s enrollment for this semester reached a record high at 29,410, up 428 or .98 percent from 28,928 students last fall.

Ann Mead, vice president for Finance and Administration, said WKU’s main focus is to retain students from fall to spring.

“We’re making every effort to improve fall to spring retention,” Mead said. “So we’ll monitor spring enrollment and make decisions about any necessary funding reductions in the budget sometime around March or April.”

During a meeting of the university senate on Thursday, President Gary Ransdell presented information regarding the total enrollment for WKU for fall 2013.

Ransdell said he had expected enrollment to be down by 300 students this semester because of stricter admission standards.

“What we didn’t expect was to be down another 300 students,” Ransdell said.

Ransdell said he was concerned with the enrollment drop because of its negative implications on WKU’s budget.

Although many student groups were down, non-resident aliens or international students were up 42.8 percent.

Ransdell said the revenue generated from international student enrollment was needed to offset the reduction of revenue from instate enrollment.

“…Were it not for the international students, we’d really be sucking wind this year,” Ransdell said.

Ransdell said there were many reasons why enrollment might be lower than expected, including the price of tuition.

A comment from a faculty member brought up the aspect that some students choose not to return to college because it is not financially feasible.

Ransdell said that is a possibility.

“We’re not overpriced, but we’re not inexpensive either,” Ransdell said.