Lady Toppers can’t catch up to No. 4 Louisville in loss 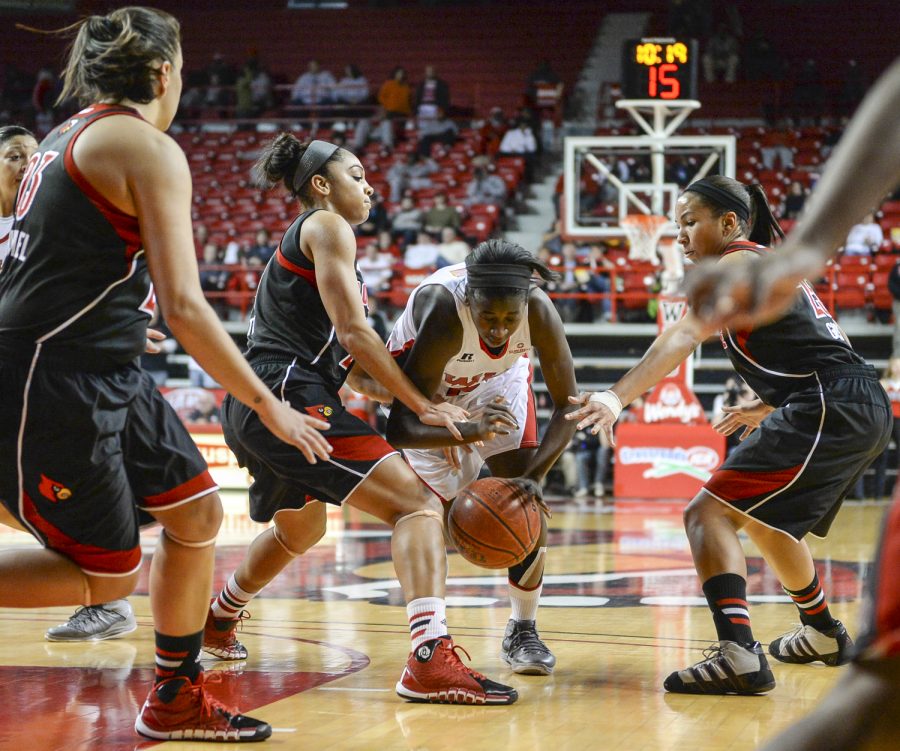 Junior guard Alexis Govan loses control of the ball as she drives the ball down to the basket. WKU lost 74-61 against No. 4 Louisville on Nov. 27, 2013 at Diddle Arena.

Despite forcing 25 turnovers, the Lady Toppers fell to defending national runner-up No. 4 Louisville 74-61 in front of 3,725 fans on Wednesday night in Diddle Arena.

It was the first time WKU has hosted a top-five opponent since No. 4 Vanderbilt came to Diddle Arena in 2001. The Lady Toppers came into the game having won 11 of their last 15 games against Louisville dating back to the 1983-84 season.

The Lady Cardinals jumped out to an early 9-0 lead and extended their advantage to 18-2 within the first five minutes of the game before a pair of three-point field goals from sophomore guard Micah Jones pulled the Lady Toppers back into the game. With those baskets, Jones eclipsed the 250-point mark for her career.

With WKU (4-2) trailing by 10 with 10 minutes to go in the first half, senior guard Bianca McGee scored five straight to bring the Lady Toppers within five points of the defending national finalist.

“It shows the fight and the determination of this team,” Heard said. “…I feel like if I was in the crowd today I know I would have been excited about what I saw…I was proud of our girls.”

The Lady Toppers came within as much as three points of No. 4 Louisville (7-0) behind back-to-back three-pointers from junior forward Chastity Gooch and junior guard Chanell Lockhart with less than two minutes remaining in the first half.

The Lady Toppers trailed the Lady Cardinals 39-34 at halftime despite forcing 14 Louisville turnovers. Gooch led all scorers with nine points in the first 20 minutes of play.

WKU opened the second half with an elbow jumper from Gooch before missing the next 10 shot attempts in the half’s first five minutes.

Despite drawing six Louisville fouls in the early stages of the second half, the Lady Cardinals converted 11 of their first 14 shot attempts in the second half to establish a commanding lead.

The Lady Cardinals continued their hot shooting en route to opening up a 19-point lead with roughly seven minutes remaining.

Consecutive three-pointers from Jones and Gooch brought the Lady Toppers back within 13 with just over five minutes left, but it wasn’t enough as WKU fell to No. 4 Louisville, 74-61.

Heard said Gooch, who finished with a game-high 21 points, was vital for the Lady Toppers.

“She was huge,” Heard said. “…She’s a gamer. She loves the game and she goes hard and plays hard all the time.”

Junior guard Alexis Govan said that despite the result, the Lady Toppers know they left it all on the court.

“We fought as hard as we could for as long as we could,” Govan said. “We didn’t step back and we didn’t cower down. They’re a really good team and we could have folded…but we didn’t. We fought to the end.”

WKU will be back in action on Sunday as Morehead State comes to Diddle Arena at 2 p.m.