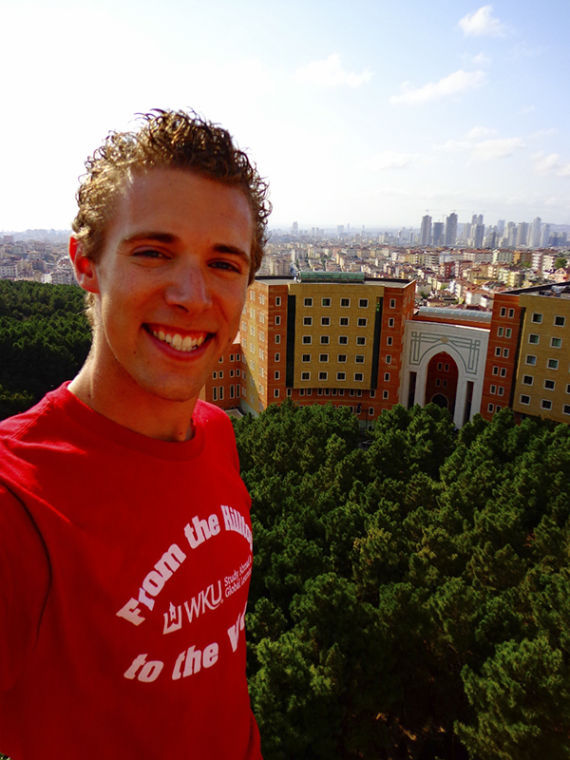 It seems WKU’s international reach does not end after students receive their diploma.

During his final few months, Hovee was caught up in the chaos of enormous protests that broke out against Prime Minister Tayyip Erdogan.

These protests garnered international coverage due to the sometimes violent responses by the government to discourage the protesters.

Instead of just watching the events on the sideline, Hovee documented the protests. His pictures and commentary were featured on the CNN website, and he was even interviewed by the CNN International channel.

“I could give my work a chance to be featured,” Hovee said of initially posting the pictures on CNN iReport.

Since this time, Hovee briefly came back to the United States only to fly back to Turkey on Oct. 18 to work as a photo assistant in Istanbul.

While in Turkey, Hovee has plans to continue to document the news as it unfolds in the region.

“I’m actually proposing to a photojournalist that we go down to the Turkish, Syrian border to cover some refugee stories,” he said.

Hovee said he got this and other opportunities because he was able to study abroad with the help of WKU.

“You have people who are dedicated who take students’ education overseas and give them any opportunities they are interested in,” he said.

In order to give back to WKU, Hovee has produced a documentary film about his stay in Turkey entitled “Istanbul: An Introduction” which can be found on YouTube.

“I thought the least I could do would be to provide a video,” Hovee said.

Beyond this documentary, Hovee was interested in pursuing documentary film production at the international level.

“I see the world is my platform now, so why not make the make the most of it?” he said.

When choosing to study abroad, he said he concentrated on places outside of Westernized countries, such England and France.

“I wanted to go beyond that and get into a place that would be somewhat more uncomfortable,” Hovee said.

However, the differences between the United States and Turkey also created some challenges for him. Since he was attending school at Yeditepe, he often needed help overcoming the language barrier.

“Sometimes I wouldn’t understand the professor at all and I would rely on students to help me,” Hovee said.

During this time, Hovee was taking Turkish language classes, which he said “made a world of difference.”

His stay also made Hovee reflect on his own country and culture has made him realize that there’s more than one way to grow up than the American way.

One of the main cultural differences of the United States with Turkey that Hovee noticed was U.S. citizens are much more independent.

“In Turkey, it is very interdependent,” he said. “People are much more connected.”

Through this new understanding, Hovee said he was able to better relate with the people of Turkey as he started to make new friends in this culture.

“That humanizes people,” he said.

Ultimately, Hovee commended WKU for its study abroad opportunities, and said other WKU students should take advantage of it to further their career and their understanding.