Red line bus driver will always be a farmer at heart 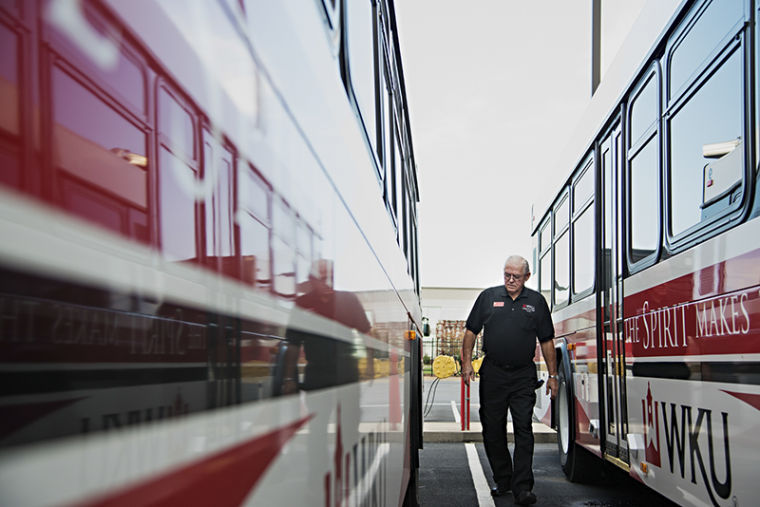 WKU transit veteran Willard Montgomery takes a walk around his bus before beginning his day on Monday, November 11, 2013. After driving a school bus Montgomery came to WKU and has been driving here for 7 years.

There’s a certain image that follows when people say they’re a farmer, a trigger in the back of one’s mind that relates the word farmer to other words such as “back-breaking work,” or “the American way.” Some even speculate that farming can be a form of self-discovery.

Turning 70 years old on Nov. 20, Montgomery spent the majority of his life farming in Bowling Green until becoming a driver on the Red Line shuttle for WKU.

Montgomery said his father tried to instill in his sons that despite their economic situation, they were as adequate as anyone else.

“I didn’t go to college, but I was the first boy in our whole family that graduated high school,” he said.

Despite growing up on the farm, Montgomery was the only one of his siblings to continue farming after marrying. Montgomery, who has been married 49 years, said he and his wife farmed together for about two decades.

“We spent our first 19 to 20 years on the farm together,” he said. “We worked right beside each other.”

The key to their long-lasting relationship, Montgomery said, is being able to give.

“I don’t ever remember us having a little argument and the next morning still being mad at one another,” he said.

Montgomery said the family hit hard times in the 1980s when interest rates went to 27 percent and the price of soybeans and corn was cut in half.

“We were in debt some,” he said. “We were doing real good until all at once, and then we had a drought.”

Montgomery said he predicted what was going to happen in the financial market and went to work as a bus driver for an elementary school.

“I was able to sell out and cover everything, but I didn’t have to take bankruptcy,” he said. “There were three million farmers during that time that took bankruptcy, but I was able to come out.”

In addition to drought and financial problems, Montgomery had to face a health issue.

“In 1982 during this time, a heifer ran under me and I had a 100-pound sack of feed on my shoulders,” he said. “She flipped me in the air and ruptured two discs in my back and I stayed in the hospital 17 days.”

To Montgomery, the worst part was not being able to do anything, but the experience helped him to become a stronger person.

Montgomery continued to farm during the years of driving a bus but only maintained 25 acres of tobacco. After retiring from bus driving for elementary and middle school in December 2005, he came to work on the Red Line in January 2006.

Although Montgomery hasn’t farmed since 2004, it remains an important part of his life.

“I think it made me realize what, really, life is about — being happy with what you’re doing,” he said. “You wake up every morning, and as soon as my eyes open up, I’m ready to go.”