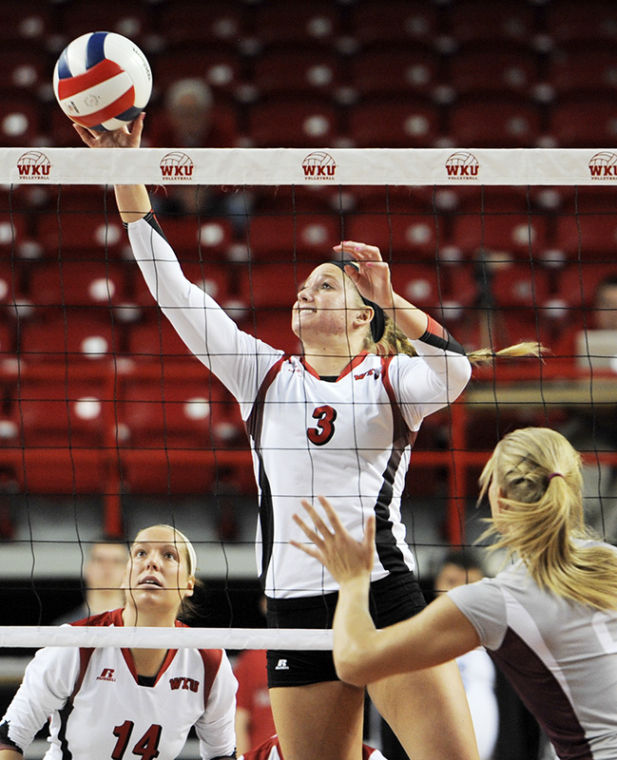 The Lady Toppers picked up another pair of sweeps over the weekend, but the volleyball team won more than just two matches — WKU clinched a share of the Sun Belt Conference regular season title and the No. 1 overall seed in the conference tournament later this month.

“We really controlled things on our side of the night tonight,” coach Travis Hudson said. “Lafayette plays really well in their own building. Getting off to a good start was big because Lafayette is a team that feeds off emotion and energy and they never really got that going tonight.”

Two days later the Lady Toppers found themselves in a fight against UALR, the team right behind them in the Sun Belt standings. In the first set alone there were 10 tie scores and five lead changes. In the end WKU prevailed as the Lady Toppers built momentum throughout the game to complete the sweep.

“It’s really comforting to know that our mental game is strong going in (to the tournament),” senior setter Melanie Stutsman said. “It’s good to know we’re mentally tougher now and that we can weather that storm and keep playing our game.”

WKU will face its next opponent, Georgia State, Wednesday at 6 p.m. at Diddle Arena.

Georgia State, on the other hand, only hit over .200 in one set and actually had a negative hitting percentage in the third set at -.034.

“We prepare for them the same we’ve prepared for everyone else,” senior outside hitter Paige Wessel said. “Just because we’re termed ‘better than them’ it doesn’t mean we prepare any different than we do for any other team.”

Earlier this season the Lady Panthers suffered a 10-match losing streak, eight of those were in the Sun Belt Conference. After that the team won four straight, their only four wins in the conference. Now, however, they are back on a three game losing streak.

“They’re a team that’s playing really well, the best they’ve played all year,” Hudson said. “They’ve made a run at that final spot in the conference tournament. They’re just a really young, super-athletic team. As young teams do, they’ve gotten better and better as the year has gone on.”

The Lady Toppers will conclude the regular season this weekend with two home matches. The Sun Belt Conference Tournament will begin Nov. 21 in Troy, Ala.