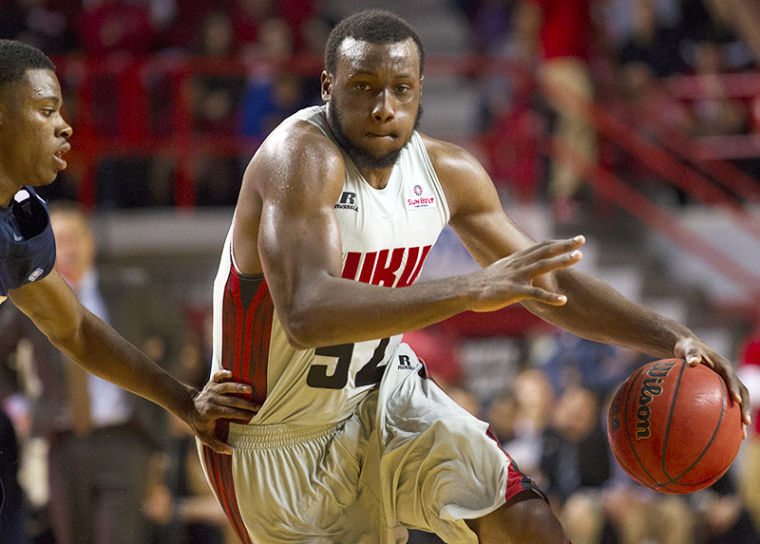 For WKU, Saturday night’s 57-50 win over East Tennessee State is just the first win in what the team hopes is many this season.

For junior forward George Fant, it was much more.

It was a confidence booster — a bounce back game to get the 6-foot-6 Bowling Green native ready for the regular season.

“I just needed a bump,” Fant said. “I wasn’t playing completely bad, it was just, I was just thinking too much.

“I had to stop worrying about what everyone else thinks and just play my own game.”

Fant scored 17 points and collected eight rebounds while shooting 5-of-8 from the field and knocking down seven of his 12 free-throw attempts.

“I thought George (Fant) looked like his old self,” coach Ray Harper said after the game. “After Monday night’s game (at Wichita State), I know he was frustrated. You know, he’s worked extremely hard all week on a lot of different areas and I think it showed tonight.”

Fant shot just 1-of-7 from the field against the Shockers and scored only two points in WKU’s loss.

Saturday night was a nice bounce back for Fant, who needed a boost before the Toppers get too deep in their schedule.

“I was happy for him,” Harper said.

Senior guard Brandon Harris was unavailable in WKU’s first home game due to an ankle injury he suffered in the Toppers’ exhibition game against Campbellsville University.

In the first half, he was driving to the lane and finding open shooters but the Toppers failed to connect on their jumpers as they finished the first half shooting 25 percent from the field.

Harper opted to play three freshmen at the same time for five minutes late in the first half. Those freshmen – guard Brandon Price, guard Payton Hulsey and 7-foot forward Ben Lawson – maintained the Toppers lead as WKU went into the half leading 25-20.

WKU started off hot in the second half, extending its lead to as much as 17 with less than 12 minutes remaining.

But the Tigers clawed back and cut WKU’s lead to five with just over a minute remaining.

On the Toppers next possession, junior guard T.J. Price drove hard to his left and dumped the ball off to Fant on the baseline. Fant quickly fired a skip pass to junior guard Kevin Kaspar on the right wing.

Kaspar rose and sunk a three-ball to extend WKU’s lead back to eight and the Toppers coasted from there for the win.

“Defensively at times we were really good,” the coach said. “Sometimes you have to win when you don’t play well and that’s what we did tonight. We didn’t shoot the ball well.”

But the Toppers held ETSU to 25 percent shooting from the field for the game.

“We turned the ball over but we found a way to win because we played pretty good defense,” Harper said.