5 things to watch for WKU against Arkansas State 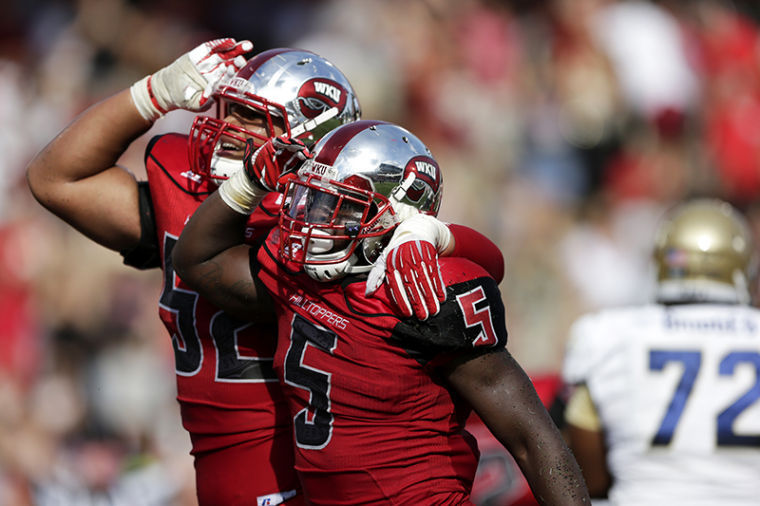 WKU's Antonio Andrews and Cameron Clemmons salute to the stands after Andrews scored a touchdown during their game against Navy at Western Kentucky University on Saturday, September 28, 2013.

1. Antonio Andrews – Andrews and three offensive lineman will play their last game at Smith Stadium this afternoon. Luis Polanco, Ed Hazelett, and Sean Conway (elbow), have helped pave the way for Andrews’ stellar career. Andrews is 117 yards away from topping his own single-season rushing record of 1,728 yards he set last season.

Arkansas State allowed Andrews to run for 215 yards last year in a 26-13 loss to the Toppers. The Red Wolves works in Andrews’ favor, who have allowed an average of 186 yards per game.

2. Brandon Doughty – The junior has emerged as the undisputed leader of the Topper offense. Doughty had a rough first half of the season, but he and the WKU offense have settled down while the team has won three straight games.

With 2,602 passing yards on the season, he is 135 away from taking over as the school’s leader in passing yards in a single season, surpassing Jeff Cesarone, who threw for 2,737 in 1985.

3. Topper Defense – Producing turnovers has been an issue for the WKU defense this season who, at the beginning of the year, anticipated adding to last seasons 23 forced turnovers. That was before last week’s 38-7 win at Texas State, where the defense produced five turnovers, the most of any game this season.

Coach Bobby Petrino and defensive coordinator Nick Holt believed the results would come earlier in the year, but said they’re glad to see the defense’s aggressiveness. That game pushed the Toppers into first place in the Sun Belt Conference in producing interceptions. Arkansas State is one of the league’s better teams in not turning the ball over, but so was Texas State before they played WKU’s defense.

4. Bowling – The Toppers are bowl eligible, but nothing is guaranteed. A win against the Red Wolves would help the team’s chances that much more. A three-game win streak helps WKU’s chances, but ending the season having won four in a row will be that much more appealing to bowl representatives, who will be at the game Saturday.

Read what athletics director Todd Stewart had to say about WKU’s bowl chances.

5. Seniors – This year’s redshirt seniors has been with the team for every year WKU has been competitive at the FBS level. They were brought in during the 0-12 year under David Elson, rode through three years with former coach Willie Taggart on the way to the team’s first bowl game last season, and now they finish their careers as Hilltoppers under Bobby Petrino with the opportunity to finish 8-4, a record football hasn’t reached yet during WKU’s years in the FBS.