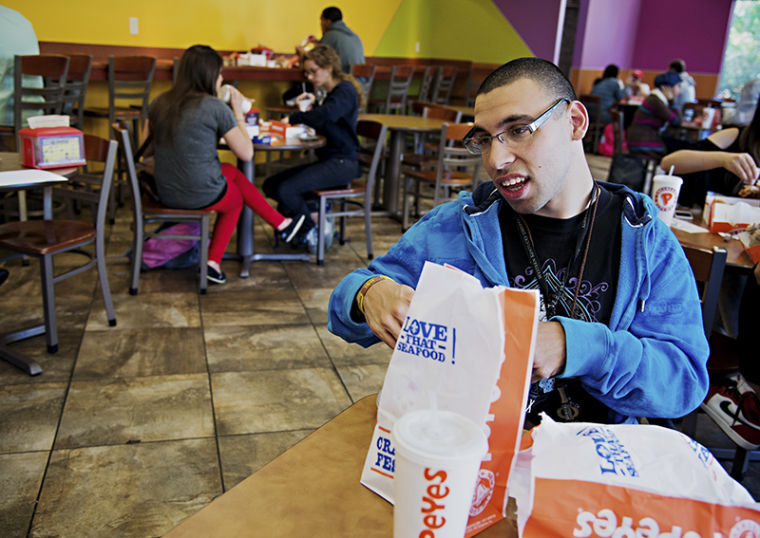 “People are afraid to ask me the question. They’re like, you know, ‘what’ or ‘why’ and I’m like, ‘Okay, I know where you’re going with this, you’re not going to offend me.’”

Having had cerebral palsy for 25 years, Josh Mata under- stands people can feel discomfort because of his wheelchair.

“I think the biggest misconception they have is that if they do ask the million-dollar question, then I’m just going to cry or pull out a knife and shank them right there or some- thing,” he said.

Mata doesn’t believe people should be afraid to ask him those questions, as long as it’s not like “a Q&A panel like you see at Comic-Con or some- thing.”

For the Lexington senior, it’s the stigma that comes with being in a wheelchair that’s more challenging than the wheel- chair.

“I see some things people post on Facebook and I’m thinking ‘Okay, you’re not afraid to say that, but you can’t ask me why I’m in a wheelchair?” he said.

“Disability,” isn’t a term that Mata would use to describe his condition. Rather, he

said he is “differently enabled. “Because of his experiences, he was inspired to go into the field of college education in disability services.

“When you get your syllabus and it says, ‘If you need any help, go to this office,’ I’ll be that guy in that office,” he said. “I want to show my students when they come in that they shouldn’t limit themselves.”

After switching from a special education major to an education and disability services major, last year around this time, Mata decided it would make him happy after one ofhis weekly conversations with his mom.

“With me wanting to be a disability services counselor, seeing how the system works, especially in education, and just knowing the ups and the downs and the challenges of making it through school…that’s what makes me to do what I want do now,” he said.

Mata said his parents are a large part of what influenced him to become the person he is.

“I have three wonderful parents, and all three of them are former military,” he said of his parents and stepfather. “That’s where I got my core values like being a nice person, an applied person, still having manners. It’s part of my DNA as a person.

“My parents always taught me you have to stand up for yourself and be as independent as possible as far as doing things for yourself but also be as loving and caring as possible,” he said.

Graduating in May, Mata is looking forward to helping other people through his life experiences.

“Money isn’t everything. As long as I can live comfortably, be happy and achieve the personal goals that I want to — that’s all that matters to me,” he said.