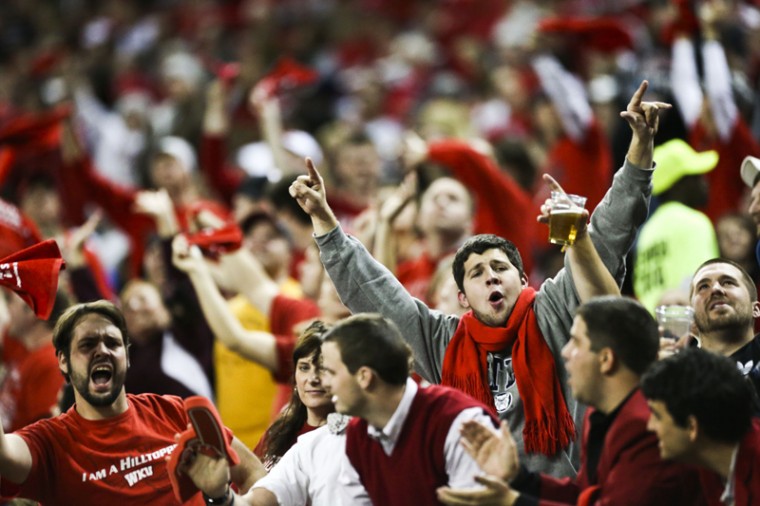 WKU fans celebrate after a touchdown against Central Michigan in the first quarter of the Little Caesars Pizza Bowl.

Many implications are factoring themselves into WKU’s contest with Arkansas State today, but none as big as finishing the season with a win.

A win will cap a four-game win streak and puts WKU at an 8-4 regular season record, the best results the school has had since moving to the Football Bowl Series level in 2009.

“This year what we’ve been able to sell is what we really couldn’t last year, and that’s that we’re hot,” WKU athletic director Todd Stewart said. “Last year we didn’t finish the season strongly because we lost four of our last six games…People like a team that’s hot and playing well”

A result mirroring last season’s record may not serve them any favors in the eyes of some bowl executives, but Stewart believes that at the same time, it actually could help.

“I think each year is different based on the pool of available teams,” Stewart said. “I think the fact that we were in a bowl helps because people are familiar with our program and we represent well, so that’s good.

“The biggest difference in this year and last year is last year you had Ohio State, Penn State, Miami and North Carolina that had a bowl ban, and this year the only team that is bowl banned is Penn State. So you have more people in the at-large pool, but you won’t have that many people in an at-large pool with 8 wins, so that’s where Saturday comes in to play.”

The Sun Belt Conference is only guaranteed two bowl games. The New Orleans Bowl takes the leagues No. 1 team (this year will be UL-Lafayette), and the GoDaddy.com Bowl in Mobile, Ala., taking the leagues No. 2 team.

CBS Sports projects the Toppers to play in Mobile Jan. 5

The Sun Belt has five teams that are bowl eligible with the possibility of adding another. Stewart believes WKU has a few selling points that other schools don’t have: Bobby Petrino as head coach, and the nation’s all-yards leader in the backfield in Antonio Andrews.

“Those are our two biggest selling points,” Stewart said. “Bobby Petrino is a huge selling point with all that he’s accomplished and the fact that he’s a head coach that has taken eight teams to bowl games, so he’s a very experienced bowl coach.

“Antonio Andrews – we promote as much as we can. He could very well break his own school record for single season rushing yards this Saturday. Those are the things that you promote because you want people to know that you’re having a lot of success in your program and you’re a hot team as well.”