Alum takes to social media to find a kidney donor 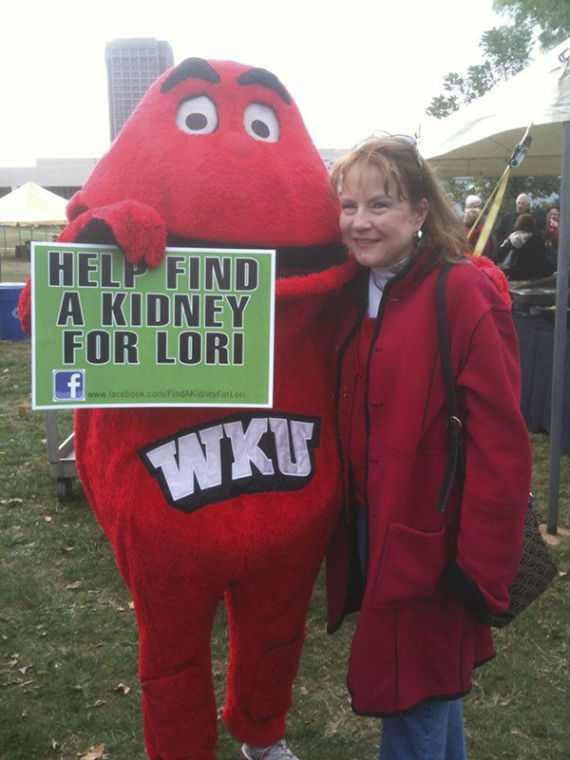 A simple message was all it took to give Lori Jeffries the hope and strength to begin a campaign in search for a live kidney donor.

The words “Help Find a Kidney for Lori” have traveled to both the University of Kentucky and WKU football games in support of Jeffries, a WKU alumna.

Jeffries graduated from WKU with the class of 1994. She and her husband Charlie Jeffries, of WKU’s class of 1993, now live in Frankfort. She has spent the last four years in and out of the hospital for dialysis treatments and various health complications, but has explicitly been looking for a donor for the past nine months.

The family visited campus on Homecoming, not only for the game, but to spread the word of Lori’s need.

Erin Robertson, Lori’s sister and a UK graduate, said it was important for her sister’s mental well-being that she attended the game to keep her mind off her daily struggle of worry and treatments.

“We’re looking for people willing to be tested and willing to donate a kidney,” she said.

Robertson has been going through the screening process for almost a month and will soon finish the proceeding with the final MRIs and tests.

The game also aided Lori in meeting other transplant patients. She said she met with a stem cell recipient who had gone through Mayo Clinic, and it was encouraging to hear how supportive the institution was throughout the procedure.

As of Oct. 28, Lori has been activated on Mayo Clinic’s recipient list.

“Mayo Clinic has been wonderful,” she said. “They’re instrumental in facilitating transplants for people with antibody issues. We met with a specialist, and I have my own pharmacist, nurses and dietitians, who I can call any time.”

Lori’s antibodies have made finding a donor challenging. She has had six blood transfusions since 2003, when she had an initial kidney and pancreas transplant. The pancreas failed the same year and had to be removed.

The kidney, however, lasted until 2009. Due to multiple transfusions, her antibodies have been complicated. That has made the search for a second donor much more difficult.

After the kidney was rejected, Lori had to resume dialysis for four hours, three days a week. Her health then further deteriorated when she contracted the H1N1 virus in 2011. It developed into double pneumonia, eventually sending her into a coma.

Her husband, Charlie, credited her restoration to prayer and playing music in her room, after the doctors tried to prepare her family for the worst. The family was not confident, as they faced additional treatments of rehab, dialysis and blood transfusions.

Lori tried several medical centers’ donor programs, but none accommodated her situation until Mayo Clinic. Charlie said the doctors were willing to allow optimism in the situation when other clinics would not.

That experience inspired the creation of the campaign for a donor, giving Lori’s situation a new light. She is more than willing to fight for her health and has spread the idea to those around her.

Charlie said he finds encouragement in his wife’s strength.

“She’s an inspiration,” he said. “She’s gone through so many things where doctors have said she’s not going to make it, but she’s strong-willed and a fighter.”

The goal now is to reach as many people as possible, alert them to the need and hope some will get screened to test if they would be a match for Lori.

The campaign is not for her alone, though. In the long run, it is to create an awareness of the kidney donor program to try to assist other recipients in the future.