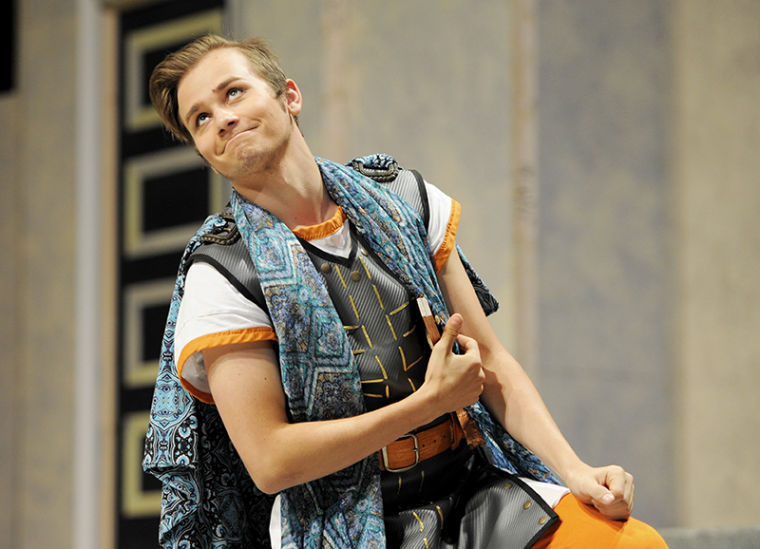 Greenville,Ky. senior Oliver Pierce rehearse his character, Antipholus of Syracuse, for the upcoming production of "Comedy of Errors" in Ivan Wilson Center for Fine Arts.

When one thinks of a Shakespeare play, slapstick humor probably isn’t one of the descriptors that first comes to mind.

The WKU department of Theatre and Dance hopes to change that with their latest main stage production, “The Comedy of Errors.”

William Leonard, a member of the Emeritus faculty at WKU, is the direc- tor of “The Comedy of Errors,” marking the 78th play he’s directed at WKU.

Leonard said he was asked to do a classic work as the second show of the fall semester, and he decided to do a Shakespearean comedy. After reading through a few different options, Leon- ard chose “The Comedy of Errors” be- cause he felt it would best serve the stu-

dents and it has a lot more universal humor than some of the others.

Leonard said there will be word play throughout the show that people might not catch because the words aren’t used anymore, but he believes the physical humor will still get the audience laughing.

He said there are also a multitude of cultural influences that contribute to the show, including both Roman and Elizabethan theatre, the port city of Ephesus and the commedia dell’arte of Italy.

After deciding against audition- ing for “Macbeth” his freshman year, Schmidt felt this was his next chance to do a Shakespeare production.

“Even though Shakespeare can be very accessible to audiences if it’s done correctly, for an actor it’s a very different experience,” Schmidt said. “I wanted to be able to experience that and get that skill under my belt for the professional world when I leave here.”

The play centers around two sets of identical twins that were separated at birth. When both of the twins end up in the same city, a lot of hilarious mix-ups and cases of mistaken identity ensue.

Pierce worked with Leonard last semester in “Pirates of Penzance” and loved his directing style.

“He’s an easygoing guy and a great director to work with,” Pierce said.

Pierce had a small part in “Macbeth” his freshman year, but he had never read “The Comedy of Errors.” Once he did, he saw that it was hilarious and knew he had to do it.

Leonard said one of the highlights for him was hiring Bowling Green junior Dillon Martin as his fight captain, which means he organizes the beating scenes in the show.

“It sounds terrible to say, but I wish there was a beating scene in every scene,” Leonard said. “There’s not, but the ones that are there are done to perfection because of his [Martin’s] work.”

Schmidt said comedy is one of his strong suits, so doing a Shakespeare comedy with such a great cast has been a great experience.

“There’s a scene talking about the kitchen wench, and it’s basically a scene of back-to-back jokes,” Schmidt said. “It’s my biggest scene and it’s full of jokes, so it’s my favorite one to do.”

Pierce said working opposite Schmidt, his best friend from high school, has been a highlight for him.

“He plays my servant twin and our scenes together are like us just hanging out, so those scenes are the best to me,” Pierce said. “I’m so glad that best friends get to play opposite each other in their senior year production. It’s going to be fun.”

Schmidt said he hopes to have a large audience for the play that’s not solely based on class requirements.

Schmidt said he hopes if people do get lost that the physical comedy will draw them in and make them want to know what’s going on for the rest of the show.

“If their energy is good, it helps ours and we give them more,” Schmidt said. “It’s a great relationship that happens between actors and audience.”

Pierce said he hopes that people don’t decide against coming because of the stigma that they won’t understand it.

“Dr. Leonard has done a wonderful job of cutting the script down from five acts to two,” Pierce said. “They’re pieced together and made where the audience can understand, and it’s hilarious. I’m really proud of it.”

Schmidt said another cast member described the style of the show as “the Three Stooges—Shakespeare style,” which he finds very fitting.

Pierce said he hopes to show people that the play is not beyond them and that it’s something they can relate to.