EDITORIAL: Senior housing not a priority 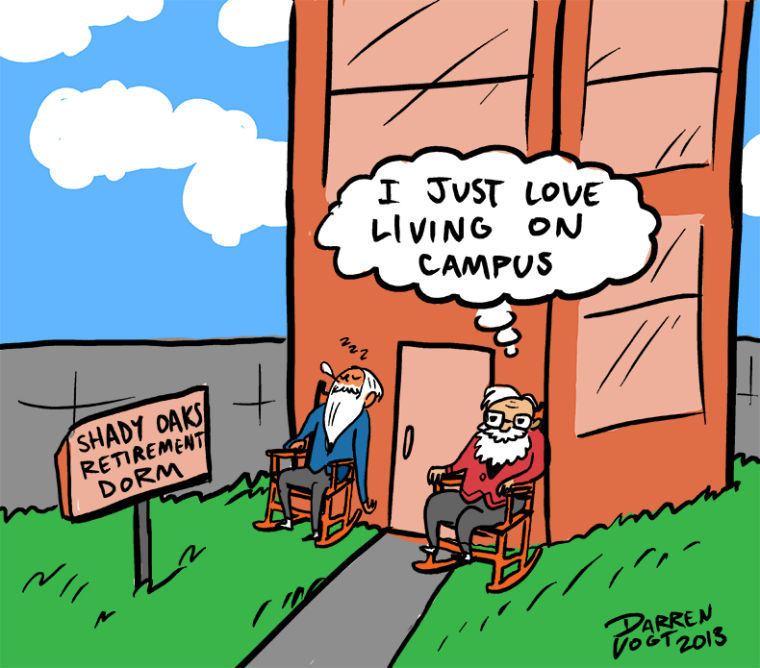 The Issue: The Board of Regents held its regular committee meetings on Sept. 27 to evaluate the current status of WKU departments as well as their goals moving forward. In that meeting, Brian Kuster, executive director of Housing and Residence Life, said his department is trying to have more juniors and seniors live on campus. He said private, individual rooms are more appealing to older students.

Our Stance: Though we commend WKU for its efforts to cater to older students, we think it is unnecessary to provide more housing options at a time when budgets are tight and the majority of students want to live off campus.

Ah, dorm life. Those were the good old days.

We loved that the opposite sex was only allowed to stay past midnight on weekends.

And we were big personal fans of communal showers.

Don’t even get us started on the huge bonus of alcohol being prohibited, and the bag and safety checks to ensure that such a rule was never violated.

That mandatory meal plan was pretty great too. Am I right?

OK, so maybe we weren’t actually the biggest of fans.

But as freshmen, we must admit that it was a great way to make friends and narrow the worries of college down to academics instead of paying rent, utility bills and budgeting for food.

Honestly, it was a great way to transition to life on our own.

We just never want to go back now that the magic of dorm life has been replaced with, for lack of a better word, reality.

But what if all those drawbacks just disappeared?

Kuster delivered a similar sentiment at the Board of Regents meeting.

“If we build anything with double occupancy, that’s not what our students want,” Kuster said.

And this has been the sentiment of HRL for years.

It’s what drove HRL to open its current, apartment-style living option in the wrap-around of the parking structure on the corner of 13th and Kentucky streets.

However, the Herald is wary of this as a priority for WKU as budgets tighten. We continue to be wary of expansion as long as such moves could fall back on student tuition or fees.

But there are two more obvious drawbacks to this HRL plan.

First, the price would likely be higher than an apartment complex offering the same deal, though Kuster said in an interview in February 2012 that WKU could offer such an option for a comparable price to apartment complex competitors.

Second, and this is our strongest objection, before we seek to add more on campus living options, shouldn’t we examine the amount of underclassmen desiring to live off campus?

Currently, freshmen and sophomores are required to live in dorms for their first two years of college.

If many of those students, and we believe there are many, want to live off campus but cannot, why is WKU trying to build even more on campus housing?

We believe something should be done to make current housing more appealing if the mandatory two years is to remain in effect before new options are added for older students.