Aulbach: Getting a feel for WKU halfway through the season 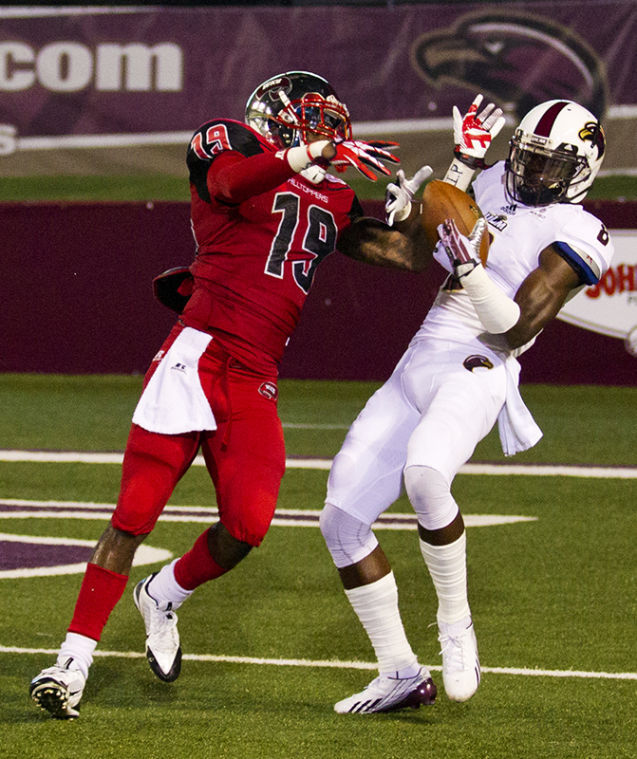 Defensive back Cam Thomas (19) gets an arm inside wide receiver Tavarese Maye (8) to break up a pass on Western’s one yard line during the first half of the WKU vs. University of Louisiana Monroe game Thursday, Oct. 3, 2013, at Malone Stadium in Monroe, La.

The Toppers have played six games this season, and with six (or seven, depending on their postseason fate) to go, we’re finally learning something about the team’s true identity.

WKU is currently sitting at 4-2, with an even 1-1 Sun Belt record after defeating a struggling Louisiana at Monroe squad and a loss to a South Alabama team that was better than initially expected. The second half of the season might seem easier — there’s no SEC foe or nation-leading rushing attack left on the schedule — but with five Sun Belt opponents left, the Toppers are going to have to finish strong to capture another bowl berth.

Senior running back Antonio Andrews was expected to play a big role in the offense coming into the year, and he hasn’t disappointed so far. After a slow start, Andrews currently leads the NCAA in rushing yards (882), ranks No. 2 in rushing touchdowns (nine) and is No. 3 in rushing yards per game (147). He’s been better than expected.

With junior Brandon Doughty taking the starting reins in the past two games, the quarterback situation — up in the air just a couple of weeks ago — appears to be settled. The coaching staff shook up the depth chart against Morgan State in September, but Doughty remains the most accurate option under center for the Toppers and has the team ranked No. 1 in the Sun Belt in passing offense.

WKU’s receivers began with a strong start but have struggled to pull in some passes in recent weeks, though Joel German has broken out as one of Doughty’s favorite targets. Coach Bobby Petrino said he attributes the group’s problems to its collective youth. The tight ends, looking to replace former stud Jack Doyle, have played well in the new offense.

The Topper defense has had a mostly strong start to the year as well.

WKU’s pass defense is the best in the Sun Belt at this point. The defensive backs, led by juniors Cam Thomas at cornerback and Jonathan “Turn Up” Dowling at safety, have pulled in six interceptions and have given up 183.5 passing yards per game — best in the conference and 35.7 less than the closest competition.

The run defense has looked like the most suspect unit on the team, but has stepped up in the past two games, shutting down a Navy team that was ranked No. 1 in the NCAA in rushing offense and holding ULM to 116 yards on Thursday. With Andrew Jackson still delivering hard hits and Xavius Boyd looking like the 2013 Sun Belt Defensive Player of the year (he leads the conference in total tackles, tackles per game and sacks), the linebackers are one of the best position groups on the team.

Much like last season, WKU has constructed an identity based on a strong offensive game on the ground and an intimidating pass defense. If the Toppers keep it up through their conference schedule, then they could be bowling again this winter.