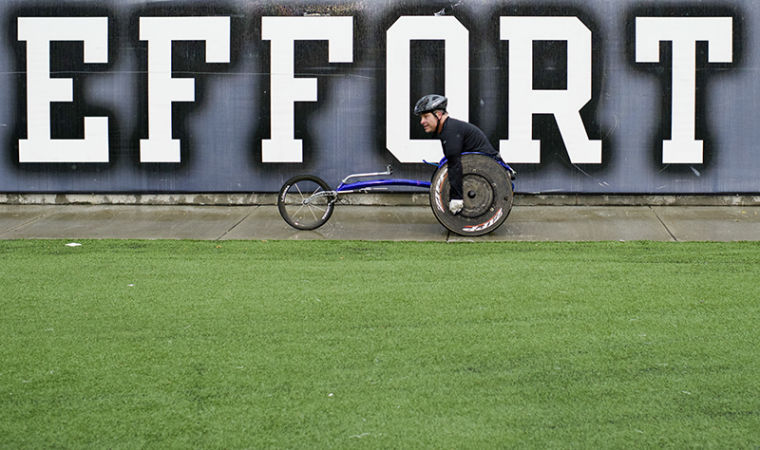 Matt Davis, 46, enters L.T. Smith Stadium at the end of his 10k race. Davis went on to finish the race in sixth place.

Runners from all over the city and state had primed themselves to compete in the 34th Medical Center 10K Classic.

The annual race snaked its way through WKU’s campus on Oct. 19, starting at University Boulevard before winding through Fountain Square and finishing in Smith Stadium. Approximately 2,300 runners participated in the race.

“If they can do it, I can do it,” Doris Thomas, race director, said.

Runners participated in four different events, each of which catered to different strengths. They were the 5K walk/run, the 10K wheelchair race, the 1.5 fun walk and the 10K children’s classic.

Carol Ann Gilbert, a Warren County Elementary School teacher, worked the registration table for the children’s classic and said the kids were excited to run the same route as the adults because they got to feel big.

“It teaches kids to have fun with physical activity and future fitness,” Gilbert said.

There were about 400 children registered for the 10K children’s classic. This was the first year that students were able to run the same route as the adults. They completed the first 9K during school hours and ran the last 1K on Saturday.

Although the rain became a chilling factor in the race, the racers didn’t give up.

First-time racers Venica Pollard and Melinda Houghton both participated in the 5K run.

“This is so much fun and everyone cheers everyone on,” Houghton said. “It’s very exciting.”

Pollard ran her first 5K in less than 25 minutes and has already set goals for next year.

Seven wheelchair participants navigated the same 10K route as the runners and completed the route in record times.

Summer Shade junior Stefanie Tudor watched the participants and said there is no way she could do that.

“It’s raining, but they are still going,” she said.

The crowd grew louder as each wheelchair crossed the finish line.

This was the first year people were able to use the stadium and cheer from the stands as runners crossed the finish line.

Thomas emphasized how much they appreciated and utilized WKU volunteers. Around 300 students from sororities and fraternities operated the water stations, registration and food tents, and performed other tasks as needed.

“We could not do it without them,” she said.