Off the Rails: WKU rails against skateboard “vandalism” 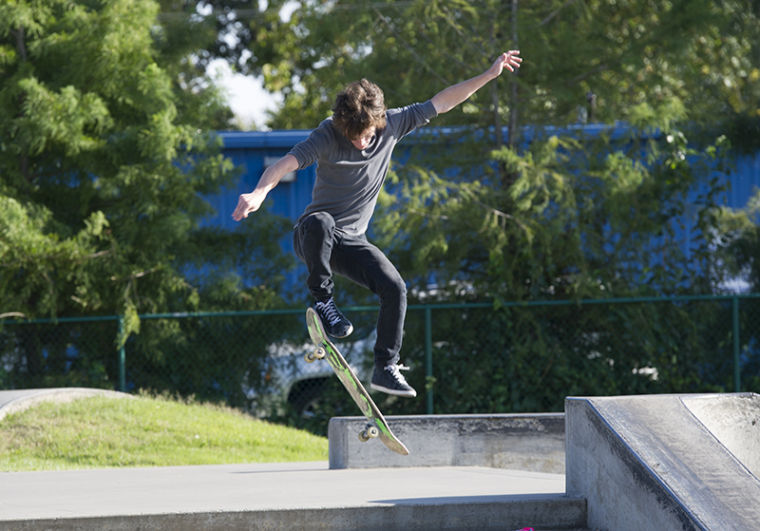 Damage to rails, benches and even artwork on campus has caught the attention of university administrators.

The culprit, they say? Skateboards.

Howard Bailey, vice president for Student Affairs, said WKU is trying to figure out how to monitor skateboard “vandalism.”

“We’ve had quite a bit of damage done to very expensive areas of campus that was committed by individuals on skateboards,” he said. “Some marble has been chipped, some irreplaceable things have been damaged by the use of skateboards,” Bailey said.

Much of the damage is attributed to the act of riding a skateboard down the rails, called grinding.

“The damage is continuous,” Dyer said. “Most of our rails are steel, and we spend a lot of time keeping those painted.”

He said there has been a lot of damage done to rails and segments of stonework since the start of the semester.

“We painted about 80 percent of the rails on campus over the summer, and some of those are already in rough shape due to the skateboards,” Dyer said.

“One ride down [from] the top of a rail with a skateboard and there’s no more paint left,” he said.

Dyer also said grinding down a rail can leave jagged edges in the metal with the potential to cause hand injuries.

Once jagged edges appear on rails, Dyer said they have to be ground down for the sharp edges to be taken off.

He said some of the newer rails on campus near the Music Rehearsal Hall have been constructed with the prevention of vandalism in mind.

“The newer handrails in some cases have had, purposely, pieces of metal welded on them that would prohibit a skateboard,” he said.

President Gary Ransdell said the damage is a problem that needs to be addressed.

“If they just stay on the streets and the sidewalks, that’s fine,” Ransdell said. “But when they start doing damage to the campus, we’ve got to address that.”

Ransdell said he has asked facilities staff and campus police to address skateboard vandalism when they see it.

“When we see a skateboarder doing something dangerous to himself or to others, we need to call them on it,” Ransdell said.

Bailey said that is difficult.

“It never happens in the presence of a person in authority, so you don’t know who did it,” Bailey said.

He said several pieces of artwork have been damaged since the beginning of the semester.

“We are very fortunate that we have some visible stand-up art on campus,” he said. “A few of those artworks have been chipped where someone ran the skateboard axle against them.”

Damage done to the “On the Point” sculpture on the Hill was reported  in the campus crime reports on Aug. 30. The newest sculpture on campus was moved from downtown Bowling Green, where the piece had a previous history of being a popular attraction for local skaters, art department head Brent Oglesbee told the Herald in September.

Ransdell said there are currently no plans to ban skateboarding, but that may change if the problem continues.

“If skateboarders continue to abuse the privilege, I wouldn’t rule it out,” Ransdell said.

Owensboro freshman William Lindsey, a skateboarder, said the idea of the university banning skateboards is ridiculous.

Lindsey said his skateboard is his primary mode of transportation around campus.

“I understand they don’t want us grinding on stuff but banning it entirely, just riding around on them, is ridiculous,” he said.

“So we struggle with how to have a policy that doesn’t take everyone that enjoys using a skateboard’s privilege away from them because of the deeds of a few,” he said.

Adding to the difficulty is that some of the students committing the damage may not be WKU students.

But Bailey said he doesn’t want to see a campus-wide skateboard ban.

“I assume it’s a lot of fun zooming down the Hill,” Bailey said.

Reporters Trey Crumbie and Tyler Prochazka contributed to this story.