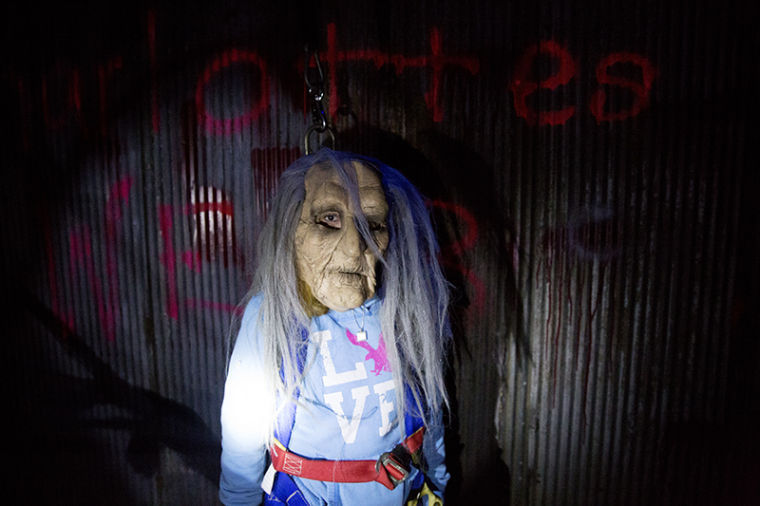 A volunteer glides through the hallway by harness at the entrance of The Haunted Hollow house on Saturday night.

When one gets terrified by a werewolf or vampire, they rarely think about what goes through the mind of the creature scaring them, but these monsters are humans just like you and me.

Skeleton’s Lair is an outdoor Halloween attraction that offers a haunted hay ride, haunted woods and a 3-D maze to allow these monsters to roam around.

There are also haunted props that move around and jump at a person if they get too close.

Olson plays as a clown within the maze.

“I usually run around, pop out at people and either make them scream or make them laugh,” Olson said.

Olson, a third-year employee, said she has made many memories while working there.

“One time, I popped out at a group and I made three grown men fall over and cry and run away from me,” Olson said. “It was very entertaining.”

Olson said there was another event where a couple of junior high girls ran out of the attractions before she had even jumped out.

She also said that it’s a lot of fun working at Skeleton’s Lair.

“You’re pretty much family with everybody there,” she said.

Not too far away from Skeleton’s Lair lies Haunted Hollow, a fundraiser event for the Wingfield Volunteer Fire Department. In Haunted Hollow, people can enjoy a hayride to a haunted house.

During their adventure in Haunted Hollow, they will encounter everything from spooky props to a vortex tunnel to ‘spooks.’

Burge said the attraction is more than what it seems.

“Of course, there’s some surprises along the way,” Burge said.

Another attraction featured within Skeleton’s Lair is called Monster Paintball Adventure. The attraction is a trailer ride with paintball guns attached to the vehicles during which people will be able to shoot ‘monsters’ they come across.

Mo Costello, an Edmonson resident who helped organize the event, said the volunteers love what they do.

“People in Edmonson county are really kind of weird,” Costello said. “They like to scare to people, so when they see people run or scream themselves to death, our spooks just start laughing.”

Costello said working in Haunted Hollow is a fun but tiring job.