Swimming into a new conference 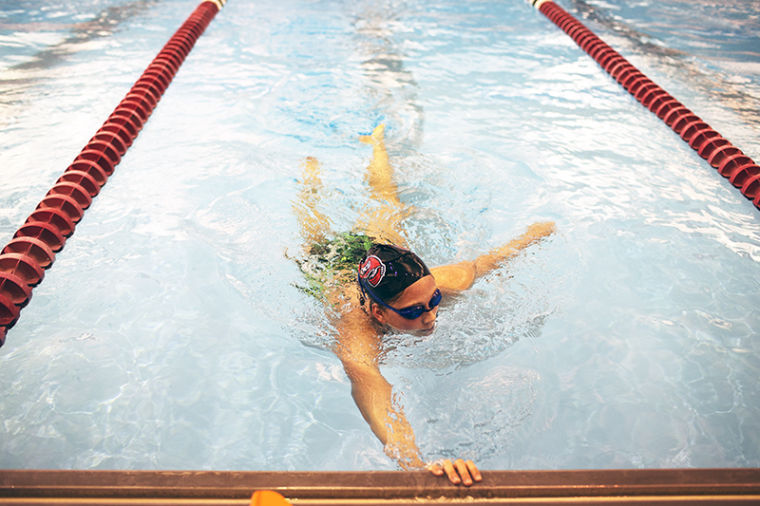 The men’s team finished second in the C-USA championship last year — its first season in the conference — falling short to Southern Methodist. With the encouraging start in a new conference, the swimmers are excited for the upcoming year.

“We have a better feel for the atmosphere in Conference USA,” sophomore swimmer Russ Bryant said. “We have a great group of freshman coming in, and I really feel like we’re already to where we were last year, so we have a good shot.”

The women will look to build off the momentum they gained after winning their ninth Sun Belt title last year.

The Lady Toppers broke seven school records last season in the Sun Belt Swimming and Diving Championships, sent 10 swimmers and divers to the All-Sun Belt Conference team, including six to the first team.

“Starting the season off strong is important for us because we need to gain our confidence and build momentum going into the rest of the year,” senior swimmer Courtney Marx said. “We face much tougher opponents this year like Rice and Houston, so it’s even more important than in other years.”

With the season on the horizon, many returning swimmers anchor the teams and their chances for a C-USA championship.

Senior captain Heitor Rodrigues is expected to play an important role on the men’s side. He just missed qualifying for a NCAA National Championship berth by one one-hundredth of a second last year and won Co-Swimmer of the Year in C-USA.

Coach Bruce Marchionda said that junior Allie Duff is ready to have a great year, as she fell just short of qualifying for a National Championship berth last year.

The new season is set to start Saturday in Cleveland, Miss., where both the men’s and women’s teams will face Delta State at 1 p.m.

With all this talent, Marchionda said he has high expectations for this year.

“Our primary goal is to win both the Men’s and Women’s Conference USA championship,” Marchionda said. “Beyond that, we want to send a number of swimmers from both teams to the National Championship.”