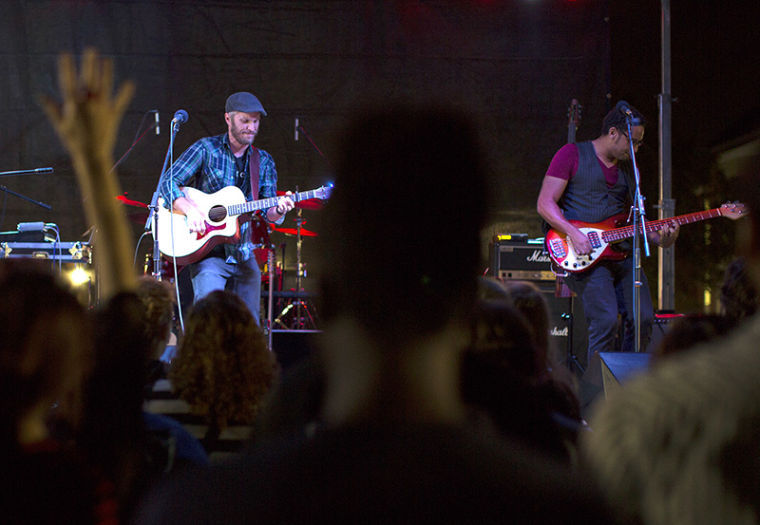 WKU students came together Friday evening to listen to a performance from Empire Theory in Centennial mall during the 2013 RevFest September 27, 2013.

A record-breaking donation from Revolution 91.7 was made to Rainhill Equine Facility last Friday at the annual RevFest concert.

An estimated 100 students were in attendance at RevFest. The charity raised $516, the most ever raised through the event, according to a Facebook post from Revolution.

The crowd clapped in unison, cell phone lights waved and money was fundraised.

“The enthusiasm for this cause is great,” Rainhill representative Lisa Salmon said about the students.

Rainhill Equine Facility is a local Bowling Green area charity, which houses and cares for around 40 disabled horses.

There were handmade horseshoes, previously worn on the horses’ feet, sold for a $10 donation.

Revolution sold everything from t-shirts to mugs along with band merchandise from Buffalo Rodeo and Empire Theory.

Salmon said everyone has been so supportive of the cause.

“There needs to be more awareness and people need to know what is going on,” Salmon said.

Students crowded on the lawn and in front of the stage set up in Centennial Mall.

Elizabethtown senior Samantha McKean expressed her excitement for the concert and the bands performing.

“It’s nice to see everyone supporting everyone else,” McKean said. “I hope they enjoy coming to local shows and supporting local bands.”

McKean is a big fan of Buffalo Rodeo and was looking forward to their performance.

“We want them to help and we have a good crowd out to support,” Baker said.

Kippes said they were selling a lot of raffle tickets and t-shirts throughout the night. Donations were filling the glass jar on the table and by 7 p.m. they had around $300 raised.

Station manager Nathan Smith was seen in the audience, with other Revolution staff dancing and rocking out with the students and the bands.

Memphis native Kristin Ford said it felt good to realize people were helping out for a good cause.

She was backstage taking pictures with the members of Empire Theory when they finished with their performance. The Orlando, Fla. native band mingled with the audience afterwards, talking to students and getting a feel for the Bowling Green community.

“The interaction with the audience is overwhelming,” Oakley said.

He said Orlando was more reserved and Bowling Green was much more involved at the show.

Oakley said he thinks the current generation of college students are the ones who are going to make a difference in the future.

“Life is short and we get a chance to make a difference,” Oakley said.