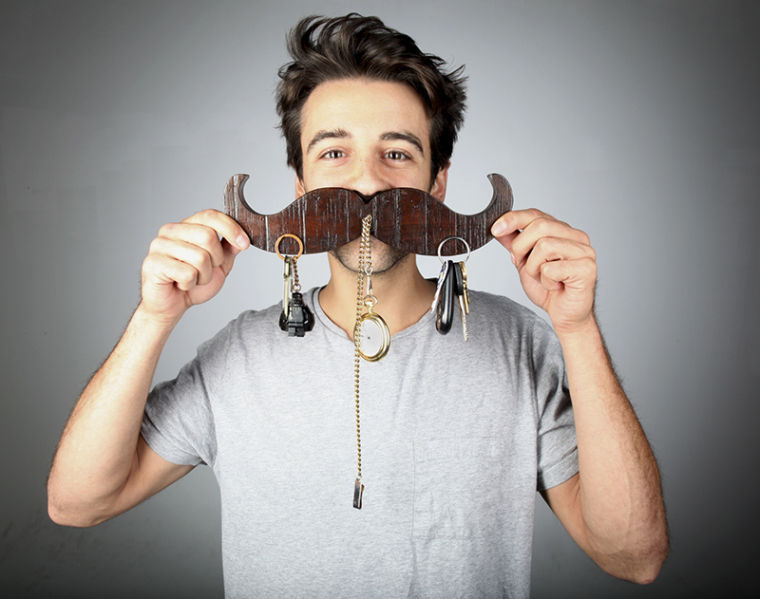 Louisville senior Ben Aroh poses for a portrait holding a "KeyStache", a product he invented to hold keys. Aroh has started a Kickstarter to raise $6,500 for a new tool to increase his production speed.

Most successful businesses start with a problem in need of fixing. Louisville senior Ben Aroh has come up with another way to make our lives easier.

It took years of lost and misplaced keys until Aroh, an entrepreneurship major, finally decided to solve the problem, developing a useful product called KeyStache.

Aroh’s handcrafted KeyStache is made of American walnut wood and rare earth magnets, with enough pull to hold a key ring in place.

“I didn’t really like the ones they sell in stores, so I just made my own,” Aroh said.

Aroh starts by sketching the design on a piece of paper to make a unique form, then traces the outline on the wooden board and precisely cuts and distresses it. Aroh continues the process of staining the KeyStache with a natural wood dye and applies an amber shellac topcoat to ensure the time endurance. Finally, he applies a dark wax to complete the units with a matte finish.

“These are not hard to make, but they are very cool,” Aroh said. “People can use them every day and they like them.”

At the moment, the most popular shape Aroh sells is a mustache, which was the first one he created. However, his favorite creation is one of the state of Kentucky. Other shapes currently being sold are a whale, fish, key, triangle and a fleur-de-key. Prices for these products range from $19 to $42. A customized work is available upon a request and costs $90.

“It’s expensive, but I’m surprised how many people actually buy them,” Aroh said.

The young entrepreneur learned the woodworking skill from his father in middle school. His father is a carpenter and owns a wood shop in Louisville, just 50 feet from their house. Aroh watched his father work and inherited the love for crafting and perfectionism.

Currently, Aroh prefers to work alone because that is the most relaxing and efficient environment for him. The only exception is his dog, a golden retriever named Bailey, who usually watches KeyStaches being made.

“She would just sit there and watch me, and then my dad would come out and say, ‘Do this better,’” Aroh said. “He is more of a perfectionist than I am. If it was up to him, KeyStaches would be perfectly smooth and perfectly sanded. I think he is just more traditional; I like more rustic and modern style.”

Aroh’s younger brother, Joseph, is a freshman at WKU. He said Aroh has always been the one in family to try to come up with new ideas for projects and creative ways to make money, but most were not finished.

“I actually really like this idea; it’s been one of his better ones,” Joseph said. “What made the idea concrete was that he actually made a video a week before the summer went out, and he put it on the Kickstarter.”

Aroh’s campaign on Kickstarter, a crowd funding site, will end in three days. But there are still a couple hundred dollars to go to achieve his goal of $6,500 to buy a CNC router – a tool that will help Aroh cut out shapes faster and more efficiently, also minimizing waste and producing more complex work.

Even though the funding would help his project get off the ground and supply a couple of wholesalers who are willing to carry his work in their stores, Aroh’s ultimate intention with Kickstarter is to gain an audience and introduce people to his product.

“For me, this whole project is more like an experiment,” Aroh said. “What I will learn is not making the product; it’s understanding the market for my product. However, every time I see a new backer for my project, I’m happy somebody likes it.”

Aroh likes to take complete charge of his project and be involved in every aspect of it. But he has a lot of friends who have always been there to help with whatever is necessary. Louisville senior Logan Rose, one of Aroh’s roommates, was with Aroh when he came up with the KeyStache idea. Rose also has helped him with some design work.

“When we have nothing to do, we sit down and discuss some cool ideas for new projects,” Rose said.

Rose also believes that once the Kickstarter campaign concludes, KeyStache will keep growing and add other handcrafted products, such as a shirt holder – one of the next business ideas on Aroh’s mind. However, finishing school and gaining work experience are currently more important. Aroh said he will do the KeyStache business on the side until he is 100 percent sure it has profit making potential.

“I want to know how somebody else does it; I need an experience before I put all my resources in one thing, but I could see myself doing this as my job in the future,” Aroh said.