NPHC Step Show goes back to its roots 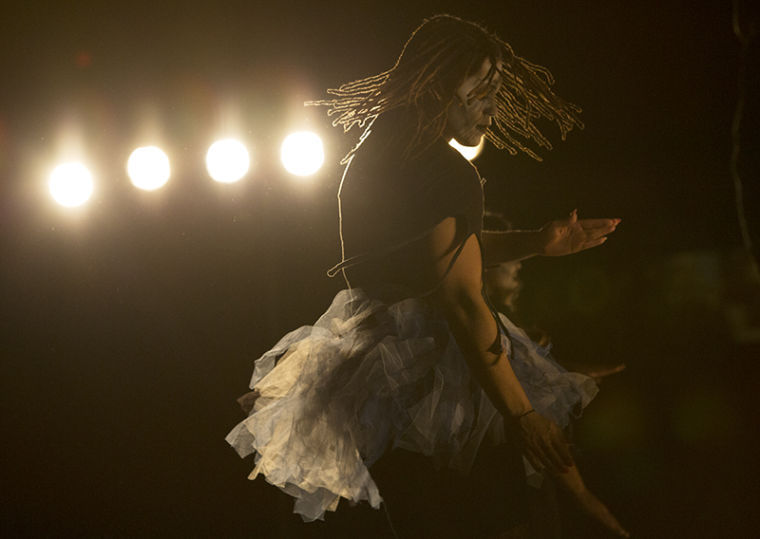 Murray State graduate student Dominique Willis performs alongside her sisters of the Nu Rho chapter of the Zeta Phi Beta sorority at the WKU step show.

Canes were broken, laughter was shared, memories were made and the history of National Pan-Hellenic Council organizations was re-lived at the annual Homecoming Step Show Saturday night.

The show started at 7 p.m. in Diddle Arena. Performers had been practicing since the summer for the show, which was especially significant because the show was canceled last year due to “logistical” issues.

President Gary Ransdell welcomed the audience to the show and thanked everyone for coming out.

“This is a WKU Homecoming tradition,” Ransdell said.

Louisville senior Kelly Mandela, NPHC vice president, agrees. That’s why the theme “Back to the Basics: Tradition at it’s Best” was chosen, she said.

“We’re trying to get back to our original ways,” she said.

Comedian Billy Sorrells, known for his appearances on the YouTube series, “Shit Black Girls Say,” was the host of the step show.

He went into the audience looking for the oldest and charter members of each of the nine organizations that were represented from around the country at the step show, where Sorrells talked to NPHC members that joined their organizations in the ‘70s.

“They incorporated historical moments very well and went back to the basics of each organization,” she said.

Smith said she thought her organization did an outstanding job.

“I appreciate WKU for recognizing all organizations,” she said.

The Omegas came out to the song “Blood on the Leaves” and then incorporated the steps of their founders throughout the history of their organization into their performance.

Alpha Kappa Alpha took a different approach. Their show featured a time machine that took them back to the year the organization was founded in 1908, forward to the 1960s and then to the present.

Nashville senior and AKA member Courtney Buggs said their show was inspired by the movie “Back to the Future: Part III.”

“We put in hard work,” she said. “We’ve been practicing since June, and we’re glad our hard work paid off and won the step show.”

AKA sorority member Zonetta English, said she thought it was great that her organization won.

“It’s very poignant, and they all represented well,” she said. “I thought they exemplified what AKA was all about.”

The AKAs and Omegas weren’t the only winners of the night. Two NPHC scholarships were also awarded.

Campbellsville senior Ashyya Robinson and St. Louis senior Karlos Harbor were awarded scholarships to study abroad next year in Trinidad, an island in the Caribbean.

Mandela said she thought the show was a success.

“At the end of the day, it’s more to stepping,” she said. “The old heads enjoy step show performances more than steppers.”

Mandela said she’s especially proud of show volunteers and other schools who represented NPHC organizations in the step show.

“You can expect a bigger and better show every year,” she said.