Price, Fant look to capitalize off experience in junior season 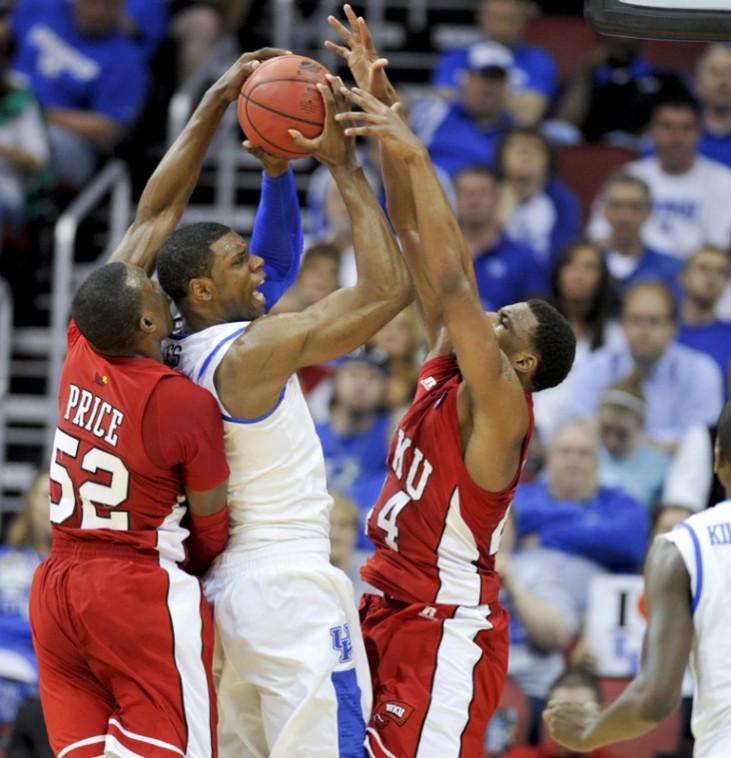 On the surface WKU looks very different with seven players entering their first season with the Toppers, but don’t be mistaken — its two best players are entering their third year on the Hill.

Junior guard T.J. Price and junior forward George Fant have won the past two Sun Belt Conference Tournament MVP awards and are taking more of a leadership role both on the court and in the Toppers’ locker room.

Price has won a lot in his first two years at WKU, last year he led the Toppers in scoring and minutes, averaging 15.2 points in 33 minutes per game.

Coach Ray Harper said the challenge for Price now is to “take that next step.” He said that there’s a noticeable difference between Price this year and in his first two years.

“We were running some sprints the other day and there was a time when T.J. would have finished in the middle of the pack or the back,” Harper said. “He doesn’t do that anymore. He tries to win every sprint.”

Harper said Price is more explosive than he’s ever been and that he’s in great condition.

Harper said that he’s also been impressed with the work that Fant has put in the offseason.

Last season against Kansas in the NCAA Tournament, Fant surprised fans by bringing the ball up the court, acting as a point guard for different sets in the game.

Harper thought Jayhawk rim-protecting savant Jeff Withey, who was No. 3 in the nation in blocks at 3.8 per game, would guard freshman center Aleksej Rostov. Instead the Kansas big man guarded Fant.

Rostov, who likes to work around the perimeter, would have been able to draw Withey away from the basket, so when Withey guarded Fant, Harper decided to change strategies. Fant would bring the ball up to keep Withey out of the paint.

Withey was still able to control the interior but what last season’s NCAA Tournament game showed was Fant’s versatility and ability to learn on the fly. He may not have been comfortable bringing the ball up, but he did anyways, and turned the ball over just twice in 24 minutes.

This year, Harper said he plans to keep Fant planted around the basket.

“To say George will never be on the perimeter, that’s probably not true,” Harper said. “But we’re going to try to get him as close to that basket as often as possible and let him do his work.”

Fant, who has started in 59 of 66 games he’s played in at WKU, is a workhorse down on the low block. He’s a wide-bodied forward who powers through defenders and fights on the glass for rebounds.

At 6-foot-6-inches he isn’t the tallest big man on the team, but he’s efficient around the rim, shooting 48.2 percent from the field in his sophomore season.

Harper said he hopes Fant and Price will continue their reign over the Sun Belt.

“I’d like to see one of them win the MVP of this year’s conference tournament,” Harper said. “That would be nice.”