WKU prepares for battle of strengths against Troy 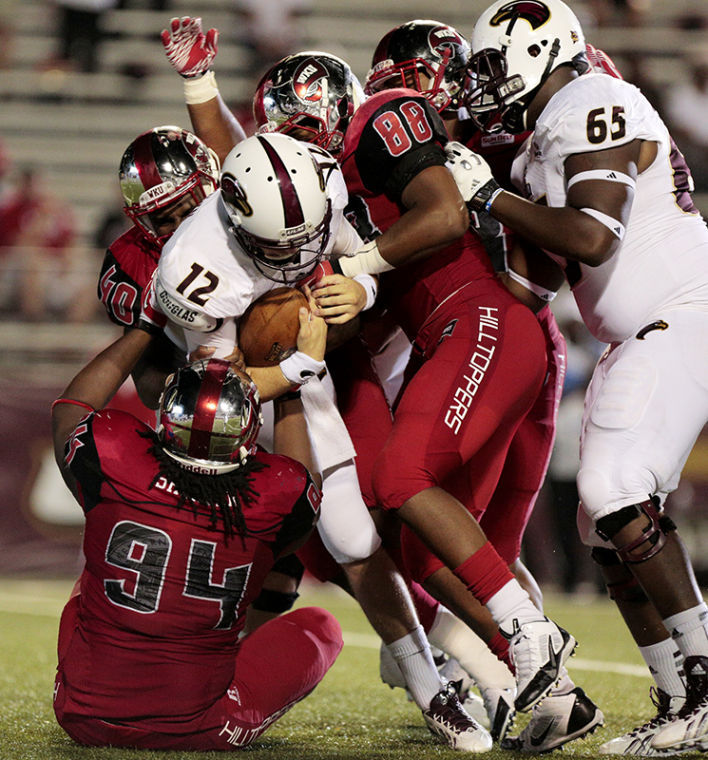 When the Toppers take the field against Troy on Saturday, it may seem like a mirror matchup of strengths. Both teams enter WKU’s Homecoming contest with an overall 4-3 record and will contest the opposing side of the ball with corresponding strengths.

WKU’s No. 2 rushing attack in the Sun Belt Conference will line up against a Troy defense that has only allowed 140 rushing yards a game.

Trojan quarterback and Paducah native Corey Robinson will make his final homecoming to his home state as well against WKU and will bring an air raid with him, but the Toppers are familiar with Robinson, and stopping the pass.

Troy’s dominance in the passing game is a mirror strength to the WKU defense that has allowed a conference-best 170 yards per game through the air.

WKU will be tested by a the Trojan quarterbacks, Robinson and dual-threat Deon Anthony. By now, the Toppers are used to preparing for teams with multiple quarterbacks, but Robinson has a history with WKU’s coach.

“Corey Robinson, a guy I’m real familiar with — very, very good player,” Petrino said. “Has a really quick release, you have to put pressure on him, you have to give him different looks. Anthony is another guy that’s big, physical and can really run the ball as well as throw it down the field. They’ve played them both in almost every game.”

Petrino is 2-0 all time against Troy, and will face Robinson for the second time on Saturday. Troy put up a fight against Petrino’s 2011 Arkansas Razorbacks, the last time the coach faced the Trojans, but fell short 38-28 in Fayetteville, Ark.

Robinson gave the Razorback defense all they could handle that day, completing 36-of-63 passes for 373 yards and three touchdowns.

But WKU’s defense said it won’t be fooled Saturday. Defensive coordinator Nick Holt said it’s obvious what Troy will do with each quarterback in the game, but they haven’t done a great job of finishing drives. Troy has turned the ball over 14 times this season.

Because these two teams mirror each other in many ways, turning the ball over bodes as an issue for WKU as well. The Toppers have fallen suspect to the turnover plague often this year, and junior quarterback Brandon Doughty’s 12 picks lead the Sun Belt.

Senior offensive guard Luis Polanco said he believes it’s been the cause of a random mistake here and there, but the team overall isn’t making consistent mistakes.

The WKU offense will have to keep a balanced offense with Troy’s ability this season to stop the run, which is WKU’s biggest strength on offense. The Toppers, according to offensive coordinator Jeff Brohm, are going to have to put the last game’s passing woes to rest and establish a balanced threat against Troy.

“We have to find ways to get big plays, take shots, throw the ball vertically and make plays when we do it,” Brohm said. “At the same time, you’re going to have to hold the ball a little longer. We can’t turn it over, we can’t fumble, we can’t throw picks, we have to really concentrate on really doing the small things and making sure every possession is important and we do everything we can to go score.”

Petrino is 28-9 when he has more than one week to prepare for a team. Despite last week’s loss to Louisiana-Lafayette, the Toppers hope the coach’s record and their own two-game win streak against a big conference rival serves them well by the game’s end on Saturday.

“Last year we lost on Homecoming,” Polanco said. “This year, one of our goals was to win every game. Actually, it being Homecoming gets everyone excited about coming up together to play the game. We should be ready for it.”