Petrino wants players to “keep their head up” 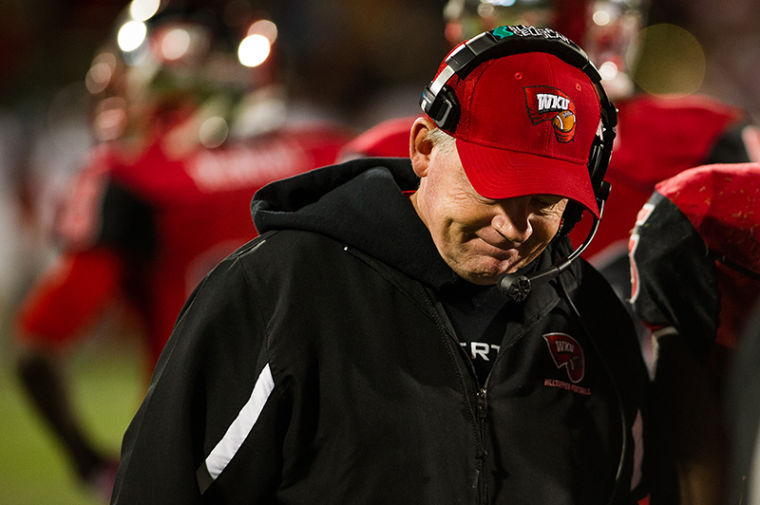 Western Kentucky University coach Bobby Petrino reacts after losing a challenge to maintain possession with less than two minutes left in the game. Western would go on to lose 32-26 at home on Saturday, October 26, 2013.

Three conference losses says that WKU’s chances of a Sun Belt title in Bobby Petrino’s first year are all but shot.

Back-to-back years of losing close games (2012 loss to Louisana-Monroe 43-42 in overtime) on Homecoming may put a damper on the spirits of the players. But while coach Bobby Petrino said every loss is hard to swallow, he wants his players to stay proud of Saturday night’s performance.

“I told our players to make sure they keep their heads up,” Petrino said. “They had a good week of practice and they prepared very hard. They went and practiced hard. They came out tonight and competed extremely hard. We just came up a little bit short.

“There’s one play here, one play there all throughout the game that could have been the difference in us winning or losing. They have to make sure they keep their heads up and come back to work on Monday and stick together as a team. They did go out there tonight and do a really good job of competing as a team.”

For senior defensive back Arius Wright, he’ll leave WKU having lost the last two Homecomings. He knows it’s tough to handle, but he also knows they have to move on to the next one.

“A loss like this, it hurts. We all know that it hurts,” Wright said. “At the same time, we have to buck up and get ready for Georgia State.”