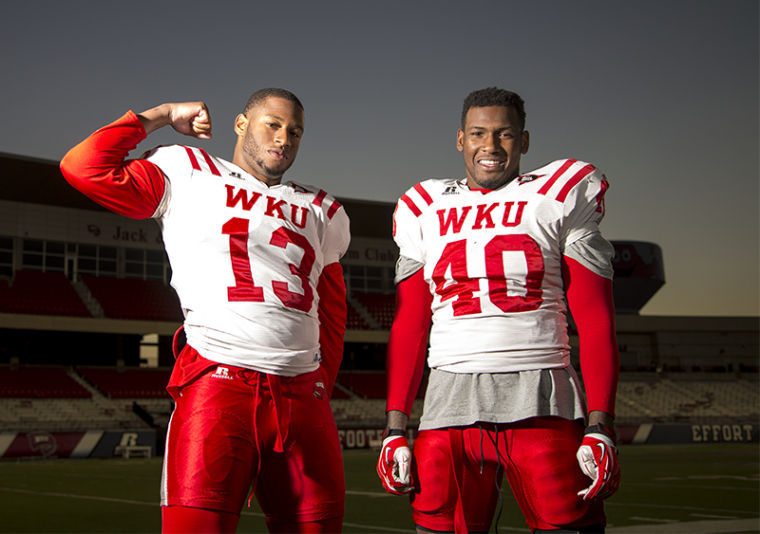 It’s a common conception that a brother is the first male friend a man will have. Whether they choose to embrace their bond or move in separate directions, the bond between brothers is one that will never break.

At first glance you can hardly tell they’re related. Even though standing side-by-side only one inch and 10 pounds separates their silhouettes, their facial appearance tells another story.

“People say they don’t think we’re brothers because we don’t look alike,” Bar’ee said. “He’s red and I’m dark. If you see my dad we look just like him in a way.”

But their personalities don’t reflect a difference.

Older brother Xavius lived with the boys’ father growing up in St. Petersburg, Fla., but he and Bar’ee were always together not only as family, but as teammates on the field.

If they weren’t playing football, it was either basketball or baseball. Even on the diamond at Lakewood High School, the brothers played next to each other — Bar’ee played in center field and Xavius was a right fielder.

But according to Xavius, football was always their first love and where they excelled the most.

As a defensive end for Lakewood, Bar’ee earned the team’s Most Valuable Player award with 68 tackles — 19 for loss — and 16 sacks.

In that same year, Xavius was a safety for the Spartans. While earning other accolades to go with his team Defensive Most Valuable Player award, he was versatile on offense with four touchdown catches.

According to Xavius, the plan all along was for the brothers to continue their lives together beyond high school. At first, some schools like Colorado State and Florida International offered the brothers together, but it didn’t feel right to them.

“We always talked about going to school together,” Bar’ee said. “At first, we didn’t have (a WKU) offer.”

Former WKU assistant coach Raymond Woodie initially recruited Xavius, but not Bar’ee. Xavius made it clear to WKU he wasn’t coming to town unless he brother was by his side.

“(Xavius) told (Woodie) he wasn’t coming there unless he offered,” Bar’ee said. “He came and checked me out and offered me too, that’s just how it went. I’m sure (Xavius) would rather go with me than be somewhere by himself. Why come all the way to Kentucky by yourself when you can come with me?”

The brothers chose to come to Kentucky over Colorado partly to the weather difference — the boys from Florida didn’t like the cold. Despite the weather conditions in Bowling Green during their official visit in the winter of 2010, they felt a connection with WKU.

“We didn’t really see anything but snow when we got here, and we had never seen snow before,” Bar’ee said. “We were focused on the snow.”

“At first when we got here, you couldn’t really see it because there was snow on the ground,” Xavius said. “We got a feel for the people and the environment that was here, but once it cleared up we saw it was the place to go.”

The brothers’ decision has paid off. The two have played all four years together on the defense, with Bar’ee starting this year at defensive end instead of linebacker.

“It was a different opportunity,” Bar’ee said. “I always felt like I was a person that could switch.”

Xavius is having a breakout year, with a Sun Belt Conference-best 12.5 tackles for loss and 6.5 sacks – a number that places him in the top 10 of the NCAA. Xavius credits the work he’s put in with his brother to what he calls a surprising year.

“I’m letting the hard work pay off,” Xavius said. “At first, I didn’t see it with doing all those extra reps and going out there with my brother running all those sprints up the hills and stuff. When the season came around and I started showing up, I took it by surprise, but I always knew I had it in me.”

The brothers’ chemistry on the field is due their strength of communication that only comes between two brothers. Even when they butt heads — “all the time” according to Xavius — they laugh about it because it’s all a part of brotherhood.

“The goals were set before we came here,” Xavius said. “The whole purpose that we came here was the same — get an education and try to make it to the next level — both of us.”