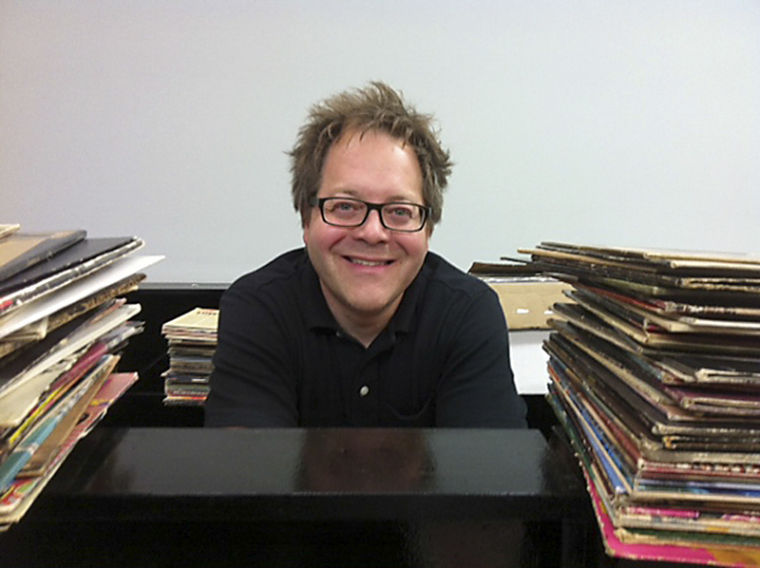 Matt Pfefferkorn is preparing for the grand opening of his new store, Mellow Matt's Records and More, on Oct. 25 to 26. Photo submitted by Matt Pfefferkorn.

For many years, there hasn’t been a place in Bowling Green where music aficionados could purchase both new and used vinyl, music from local bands, and even get chances to see those bands perform live in-store.

That is all about to change with the grand opening of Mellow Matt’s Music & More.

Matt Pfefferkorn, a Bowling Green resident who attended WKU from 1988 to 1992, is the owner and namesake of the store.

Matt said he got a job at a record store in the late 1980s and has been in that same business for more than 27 years.

“A lot of people always want to run their own business,” Matt said. “I always wanted to have my own record store, and now I’m essentially getting the chance to do it and the way I would want to.”

Kimberly Pfefferkorn, Matt’s wife, said opening a record store has been a dream for them as long as they’ve been together.

“We’d sit on the back porch dreaming up what it’d be like to have our own record store—what it’d look like, what we’d do differently,” Kimberly said. “Anybody that has a love of music—that is their dream. I’ve got a legal pad from 2001 after we got married where we jotted down ideas for what kind of music we’d want to have in our own store.”

Matt said the store is going to be centered around music, carrying new and used vinyl.

“That’s a big thing for me, being so much into music, because there’s not really a store that caters to new vinyl,” Matt said. “Bowling Green is such a big music town from all of the bands that have come from here this decade and previous ones, so there’s obviously a lot of music people and record people here.”

Matt said the store will carry music from local bands and have in-store performances from local bands and artists. He said they will also reach out to local authors to do book signings and sell music memorabilia, stereo equipment, posters, books, and more. There will be an in-house technician who will be able to do repairs on stereo equipment and the store will special order anything they don’t already have for their customers.

Rachel Feldman, a Bowling Green resident who attended WKU from 2002 to 2004, is the manager of Mellow Matt’s Music & More.

“My passion has always been music, so I gravitated towards trying to combine what I’m good at with what I loved,” Feldman said. “I worked at another store with Matt and the opportunity rose here and he asked me to be store manager.”

Matt said he is excited to open a true local business in Bowling Green and plans to partner with other local businesses and work with groups to do community outreach projects, as well.

Kimberly said meeting with other local businesses and having people stop by and reach out in excitement has been a highlight of the journey for her.

“Our community has been blessed for many years with incredible legendary musicians that come out of our area,” Kimberly said. “I think this really gives us a chance to give something back to our community.”

Matt said the Small Business Development Center at WKU was very helpful to him in the beginning stages of trying to open the store.

“Their center was very helpful in helping me find starting points as far as operating expenses and stuff like that,” Matt said. “Most people might think, ‘I want to open a record store and all I have to do is rent a space and set it up,’ but there’s more to it than that. You have to essentially do a business plan and figure out if it’ll work or not and then go forth with everything else.”

Matt said they built the fixtures to hold the records from the ground up and then went through the process of finding records to stock the shelves.

“It’s not something you can just do overnight or during a weekend,” Matt said.

Feldman said one of the highlights for her has been seeing the progress of the store to this point.

“Building shelves and putting them in place and getting merchandise in and seeing the store come along is really cool,” Feldman said. “One of my favorite things is getting to order new music and see that come in and get to flip through vinyl again.”

Matt said everybody opens a business with the idea that they want success, and he’s no different from the next business man. He said he has hopes of giving back to the community through charity work and partnerships with schools and other local businesses.

Kimberly said she wants the store to bring the community whatever it is they may be looking for.

“We want to bring back that personal touch to customer service while also giving music lovers what they want,” Kimberly said.

Mellow Matt’s Music & More is located on the corner of Smallhouse Road and Scottsville Road in Twin Oaks Center.

The store’s grand opening is set for Oct. 25 to 26. Local and regional bands will be playing both days as a kick off.