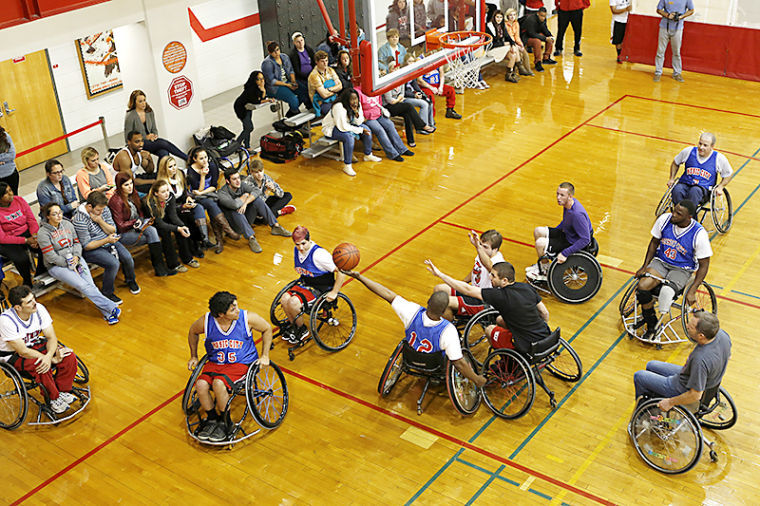 There was standing room only as the Music City Lightning took the court at the Wheelchair Basketbrawl Challenge Thursday night in the Preston Center.

Three bleachers, spilling with students, sat near the basket as other newfound fans stood along the sidelines.

The Lightning, a wheelchair basketball team out of Nashville, played a scrimmage, then invited students to play.

Chicago freshman Corey Stevens, 19, worked up the nerve to get in the game.

Stevens said he now has a better appreciation for people in wheelchairs.

“I can honestly say you’ve got to be in more shape in a wheelchair than actually on your legs because you’ve got to have good upper body strength because that’s all you use is your upper body,” Stevens said. “It’s a lot of hard work.”

Senior Andrea Weaver, 23, of Elizabethtown, Ky., said her arm strength wasn’t up to snuff to compete with the professional team.

“It’s really hard,” Weaver said. “They make it look really easy. When you get out there, it’s really, really hard pushing and trying to hold the basketball. When you try to shoot, you can’t jump, can’t do anything. But I tried.”

After playing alongside the Lightning, Stevens said disabled people shouldn’t be underestimated.

“I respect them more,” Stevens said. “I don’t take their game as a joke. They are capable of doing it just as well as we are.”

Freshman Damion Wheeler, 18, of Hopkinsville, Ky., said he’d seen the wheelchair sport on T.V. before and wanted to see it live.

Although Wheeler said the Lightning outplayed him and the other students that got in the game, it was still a fun learning experience.

“I just noticed that no matter if you have a disability, if you want to work hard and do what you got to do, there ain’t nothing you can’t do,” Wheeler said. “Now I just realize that they’re just people just like we are.”